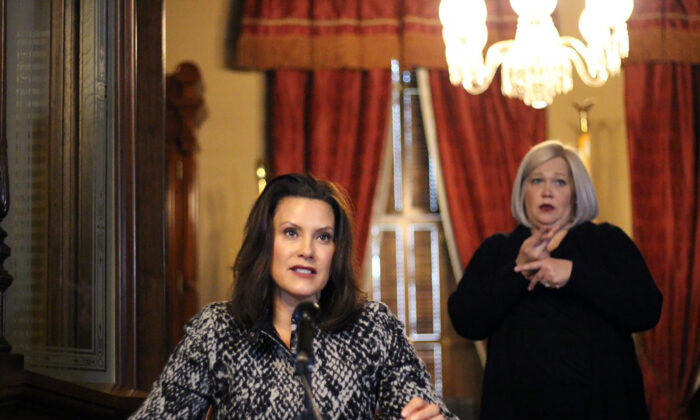 Michigan Gov. Gretchen Whitmer addresses the state during a speech in Lansing on April 13, 2020. (Michigan Office of the Governor via AP, Pool)
AMERICA

Michigan Gov. Gretchen Whitmer extended her state’s stay-at-home order until May 28 after it was previously slated to end on May 15.

The “Stay Home, Stay Safe” stipulates that up to May 28, residents cannot leave their homes except to run critical errands, engage in safe outdoor activities, or to go to specified jobs.

The measure was first slated to expire on April 30 and was extended for another two weeks.

Whitmer will allow employees in manufacturing plants to return to work.

“This is good news for our state, our businesses, and our working families,” Whitmer told reporters on Thursday. “We’re not out of the woods yet, but this is an important step forward on our MI Safe Start plan to re-engage our economy safely and responsibly.”

She added: “As we continue to phase in sectors of our economy, I will keep working around the clock to ensure our businesses adopt best practices to protect workers from the spread of COVID-19. When we all keep doing our part, we can reduce the risk of a second wave and re-engage our economy safely and responsibly.”

Whitmer told news outlets that the manufacturing industry makes up about 19 percent of the state’s economy.

“This is a sizeable part of our economy and it’s an incremental step,” she said.

The governor loosened restrictions during the last extension, including allowing people with multiple in-state homes to resume traveling between them.

“The vast majority of people in this state are doing the right things. We’ve seen the curve get pushed down,” Whitmer remarked. “I think it’s appropriate to reevaluate along the way. At this point we feel like’s good to have our first wave of reengagement in this way.”

It has been about two months since Michigan bars and restaurants stopped dine-in service when the governor ordered the closures as part of social distancing requirements to slow the spread of the CCP (Chinese Communist Party) virus, a novel coronavirus that emerged in China.

Whitmer added that as time progresses and Michigan enters future phases, regions in the state could reopen to various degrees.

But some of Whitmer’s critics believe restaurants should reopen today.

“I continue to believe that the Upper Peninsula is ready to be fully open, even to the restaurant level, as long as our local officials are given the charge to manage it appropriately,” said Republican state Sen. Ed McBroom told MLive.