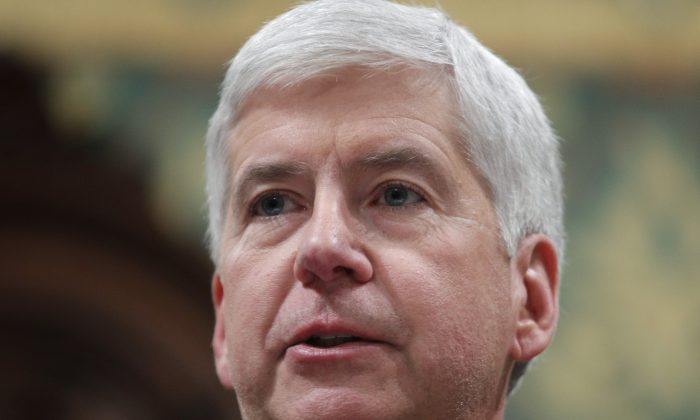 Michigan Gov. Rick Snyder delivers his State of the State address to a joint session of the House and Senate, Tuesday, Jan. 19, 2016, at the state Capitol in Lansing, Mich. (AP Photo/Al Goldis)
US

Michigan Gov. Snyder Just Got Called to Testify Before Congress Over Tainted Water

Michigan Governor Rick Snyder has been summoned to testify to Congress as federal officials try to determine how the Flint water supply was contaminated with lead.

“We trust our government to protect the health and safety of our communities, and this includes the promise of clean water to drink and clean air to breath. Unfortunately, the people of Flint have had their trust violated. This public health crisis was caused by state and local officials, who made tragically bad decisions with the drinking water of Flint. Congressional oversight is needed to set things right, on behalf of the people of Flint and on behalf of future generations. Anything less than that would demonstrate gross negligence in providing the services that our constituents need and deserve,” said Michigan Congresswoman Brenda Lawrence in a statement announcing the summons.

Lawrence is on the House Oversight and Government Reform Committee.

“It is estimated that thousands of children in Flint have been exposed to lead-tainted water, even after parents were assured it was safe. This was all done to save a few dollars. In Detroit, we are engaged in an air quality war, and yet, the MDEQ (Michigan’s Department of Environmental Quality) has remained silent about a company’s proposal to release additional pollutants into our atmosphere,” Lawrence added.

“Detroit children struggle with the highest rate of asthma among America’s 18 largest cities. Our local and state government’s failure to address the Flint water crisis and other health hazards not only impacts the immediate health of these innocent children, but it can also lead to lasting and irreversible harm. This includes a range of learning, physical, and behavioral disabilities. This is unacceptable.”

A number of other people, such as Mayor of Flint Karen Weaver, pediatrician Dr. Mona Hanna-Atissha, and researcher Marc Edwards, have also been summoned to testify.

It’s unclear when the hearing will take place, though, as Jason Chaffetz, chair of the committee, has yet to respond.