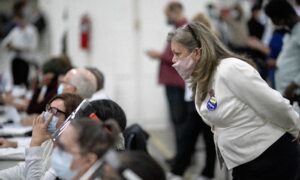 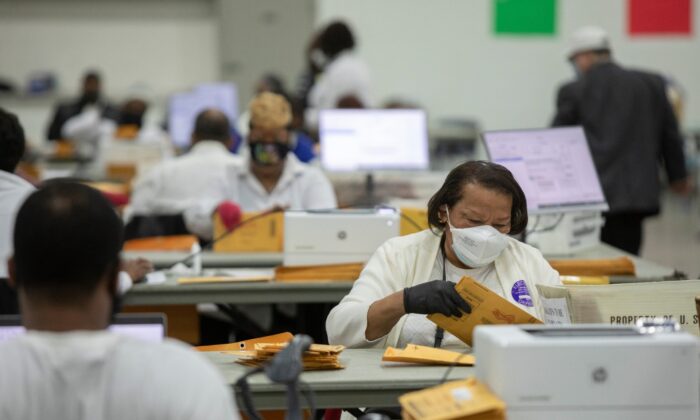 Workers with the Detroit Department of Elections sort through absentee ballots at the Central Counting Board in the TCF Center in Detroit, Mich., on Nov. 2, 2020. (Elaine Cromie/Getty Images)
Michigan

A GOP poll observer in Detroit’s TCF Center in Michigan on Nov. 3 alleged that election workers didn’t disqualify any ballots, suggesting such a practice is highly unusual.

“I saw a ballot for Taniqua Haynes, it comes up in the computer as the wrong ballot number. They mailed her ballot number 5748, but that’s not what she sent back,” poll watcher Chris Schornak said in an interview. He said that his challenges were rejected by election officials: “They refused to put challenges in the electronic log.”

In Haynes’s case, officials assigned a new ballot number, but Schornak asserts that it “should have been a spoiled ballot.”

“They didn’t disqualify a single ballot” despite numerous ballots not having voters who were on the list of legal voters that were published by the Michigan Secretary of State’s office, he remarked. Poll workers at the TCF center overrided the rules “in order to make ballots go through,” he said. “This affected thousands of ballots that were no good, and were counted, and could not be authenticated as legitimate voters.”

When he observed the ballot process at a tabulation center in Royal Oak, Michigan, he noted there were 10 challenged ballots out of 25,755, suggesting it’s unusual to see none in Detroit.

“I kept seeing a voter birthdate of 1900. I could tell it wasn’t right,” Schornak said, while alleging fraud. “I tried to document it, but so many things were going on and I was flustered. I think they were just creating a record for those people in order to process their ballots. They had a systematic way of doing it, they were good at it. It was coordinated and it was organized.”

Like other witnesses, poll workers, and poll challengers who testified at a Michigan Legislature hearing last week, Schornak noted a pattern of intimidation and harassment at the TFC Center on behalf of election workers. Several Michigan Republicans on the Wayne County Board of Canvassers and State Board of Canvassers said they were threatened and harassed last month.

“This woman followed me and harassed me for five hours,” Schornak said, without elaborating. Also echoing claims from hearing witnesses, he said the rules were enforced differently to Democratic and Republican poll challengers, saying that GOP observers couldn’t speak to poll workers. Democrats, he said, were able to do so.

Previously, Secretary of State Jocelyn Benson said there is no evidence of voter fraud or irregularities that would overturn the election results in the state, which has 16 Electoral College votes.

“Where evidence exists of actual fraud or wrongdoing, it should be submitted in writing to the Bureau of Elections, which refers all credible allegations to the Attorney General’s office for further investigation,” Benson said in November.

A spokesperson for Michigan’s Secretary of State’s office, in a statement to The Epoch Times, responded to the allegations in the Michigan hearing.

“No actual evidence of any wrongdoing or fraud was presented, despite repeated questions requesting such evidence from lawmakers,” the spokesperson said on Dec. 2 following the event. “Instead we saw a regurgitation of vague accusations based on lack of knowledge of election procedure and widely debunked conspiracy theories. We hope the state Senate will allow future testimony illustrating the facts underlying this election.”