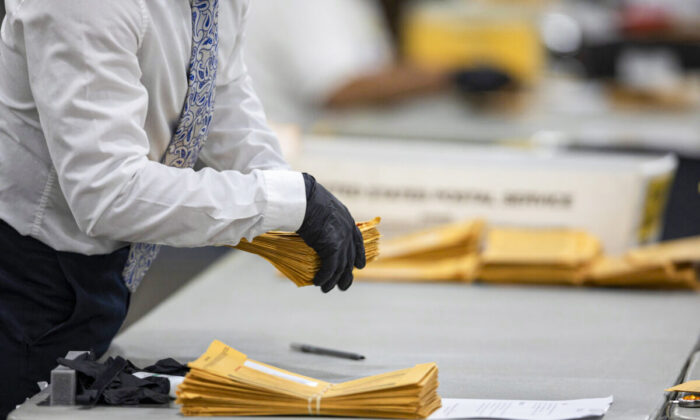 A Michigan elections worker is seen in a November 2020 file photo. (Elaine Cromie/Getty Images)
US News

“We write to you today urging you to investigate, and bring charges if credible evidence is found, the Secretary of State of Michigan, members of her office, and any organizations or individuals for crimes related to fraud committed in the 2020 election and crimes brought to light in the documentary 2000 Mules,” reads the GOP’s letter, first published on Scribd by NBC’s Ben Orner on June 16.

The documentary features the undercover investigative work of David Lara, a citizen investigator, and Arizona State Senate candidate Gary Snyder, as well as investigations conducted by the election integrity organization “True The Vote” on an alleged coordinated ballot trafficking operation during the 2020 election.

Described as an exposé of “widespread, coordinated voter fraud in the 2020 election,” the documentary draws on cell phone location data paired with video surveillance footage that showed a cohort of people allegedly dropping ballots off at drop boxes situated outdoors on average more than 20 times each. Those people were dubbed by the investigators as “mules.”

“One such instance included a ‘mule’ in Atlanta visiting ballot dropboxes 28 times. Michigan was named as a state that had such mules influence the 2020 Presidential Election,” the letter reads.

“The Secretary of State used 4.5 million dollars of CARES funds to recklessly mail absentee ballot applications to all registered voters not on the permanent absentee voter list,” the lawmakers said, referring to the $2.2 trillion COVID-19 emergency relief fund passed in a bill by Congress in 2020.

State law states that absentee voter ballot applications may only be made by a written request signed by the voter, an application form provided by the city or township clerk, or a federal postcard application.

The lawmakers further allege that the Secretary of State violated the Administrative Procedures Act by issuing an order to Michigan clerks in October 2020 to “presume the accuracy of absentee ballot signatures.” They cite State Court of Claims Chief Judge Christopher Murray’s 2021 ruling that states Benson’s signature verification guidance was “invalid.”

“The standards issued by defendant Benson on October 6, 2020, with respect to signature-matching requirements amounted to a ‘rule’ that should have been promulgated in accordance with the APA,” ruled Murray on March 9, 2021, who referred to the state’s Administrative Procedures Act as APA .“And absent compliance with the APA, the ‘rule’ is invalid.”

The lawmakers raised concerns about the role that non-profit organizations, which allegedly contributed private funding towards election administration, played in the 2020 election.

“The receipt of nonprofit grant money by local clerks, and not the Secretary of State’s Office, is uncharted territory, especially when the money is used for dropboxes. 7.6 million dollars was distributed among 19 municipalities from Zuckerberg’s Center for Technology and Civic Life in the form of 474 grants, the most given to a state in the nation,” they said.

During the 2020 election cycle, Facebook founder Mark Zuckerberg and his wife gave $419.5 million to left-wing activist groups, purportedly to ease the strain on election systems during the COVID-19 pandemic. Of this funding, $350 million went to the Safe Elections Project of the Center for Technology and Civic Life (CTCL), which in turn used the money for grants to sympathetic groups, according to the Thomas More Society’s Amistad Project.

In response to a press inquiry from The Epoch Times, a spokesperson from Benson’s office said the GOP lawmakers’ letter is “replete with false statements and misinformation.” The spokesperson said that Benson “acted properly” in sending absentee ballot request forms amid COVID-19 and that no clerks were given instruction to presume the validity of voter signatures. The spokesperson rejected the evidentiary value of the “2000 Mules” documentary.

“As the top legal officer in the State of Michigan, you are tasked with the enforcement of our state’s laws,” the letter continued.

“You have a statutory obligation to investigate reported violations of the law and we urge you to look into the new evidence brought forth in 2000 Mules and to review the security of our elections.”