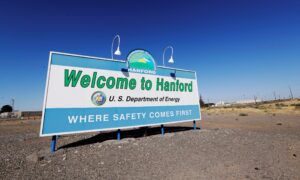 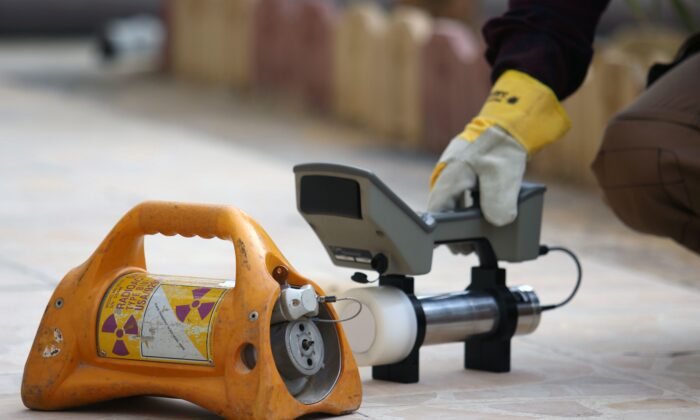 Iridium-192, a radioactive material, being scanned after going missing in Iraq for more than three months, near Basra, Iraq, on Feb. 22, 2016. (File Photo/Haidar Mohammed Ali/AFP/Getty Images)
US News

A Michigan-bound shipment of radioactive material, sent by an Ohio company weeks ago, never reached its destination, according to the nation’s nuclear regulator.

A July 29 filing by the U.S. Nuclear Regulatory Commission (NRC) indicates that a shipment containing a source of Iridium-192, a “Category 2” level of radioactive substance, was dispatched from Ohio-based Prime NDT Services, Inc. via an unnamed carrier, on July 12.

The NRC’s event notification report, which identified the shipment as a “lost source,” said that, as of July 21, the radioactive material had still not arrived at its Michigan destination.

An Epoch Times request for clarification from Prime NDT as to whether, by July 30, the radioactive material had been located and what actions the company had taken to find the missing material was not immediately returned.

Exposure to Iridium-192, which is a a manmade radioactive element that is formed from nonradioactive iridium metal in a nuclear reactor, can increase the risk of cancer, cause burns, acute radiation sickness, and even death, according to the Centers for Disease Control and Prevention (CDC).

The NRC, which said in the event report that multiple agencies have been alerted about the missing shipment, classifies Iridium-192 as a “Category 2” hazardous material.

“Category 2 sources, if not safely managed or securely protected, could cause permanent injury to a person who handled them, or were otherwise in contact with them, for a short time (minutes to hours),” the report notes.

While the NRC did not specify the amount of the iridium isotope in the shipment, the agency noted that, “it could possibly be fatal to be close to this amount of unshielded radioactive material for a period of hours to days.”

Steve Fetter, a dean at the University of Maryland Graduate School and a member of the National Academy of Sciences Committee on International Security and Arms Control, told The Detroit News that it’s not unheard of for shipments of radioactive substances to go missing.

“It’s not often, but it does happen because there are so many shipments of radioactive materials, millions every year, that I suppose it’s inevitable that occasionally one goes missing or is misplaced,” he told the outlet.

But Fetter added that, since the radioactive substance would have been stored in a special container, there would be no risk to anyone coming into contact with the shipment unless they forced the container open.

He added that, since the radioactive source is a metal, it would not be an attractive target for someone bent on causing harm to the public by stealing and dispersing a radioactive material.