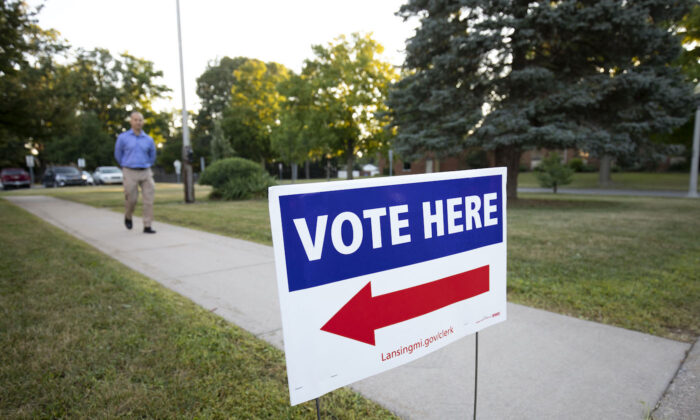 A voter arrives at a polling location to cast his ballot in the Michigan Primary Election in Lansing, Mich. on Aug. 2, 2022. (Bill Pugliano/Getty Images)
Michigan

Michigan Board of Canvassers Denies Place on Ballot for Proposed Election, Abortion Amendments

Two citizen-initiated petition drives to amend the Michigan Constitution failed to secure a place on the November general election ballot due to textual deficiencies.

The decisions were made by the Board of State Canvassers (BSC) at an Aug. 31 meeting.

One petition sought to create constitutional mandates for election practices that the Republican-controlled state legislature has tried repeatedly to overhaul or ban—such as the use of absentee ballot drop boxes and the funding of elections by private groups. The other petition would make abortion a constitutional right in Michigan.

Both petition drives obtained more than the requisite number of valid signatures to appear on the ballot, and advocates for each proposal vowed to appeal the BSC decisions to the Michigan Supreme Court.

Republicans on the BSC contended that the language of the election proposal failed to inform petition signers of all the sections of the state constitution that would be affected by the petition’s language as required.

The proposal, called Promote the Vote, is backed by left-wing political action committees and opposed by conservative groups. Critics fear it would also open the way for convicted felons and jail inmates to vote.

“We are confident that the courts will remedy this needless and unjustified attempt to block our proposal.” Khalilah Spencer, president of Promote the Vote 2022, the organization that created the proposed constitutional amendment, said in an Aug. 31 statement.

Kristina Karamo, the GOP nominee for secretary of state, criticized the proposition,  calling it a disarmingly written petition that is being used as a cynical ruse to deceive voters into thinking they were voting for more secure elections when in reality, she says, the opposite is true.

“The canvassers got it right in denying it a place on the ballot,” Jamie Roe, spokesperson for Secure MI Vote, a grassroots conservative organization opposed to the Promote the Vote amendment, said in an Aug. 31 statement.

“Michigan’s Constitution has strict rules that must be followed before a proposed amendment can be put before the voters.

“Promote the Vote violated those rules.”

Roe said the proposed amendment would render meaningless Article 2, Section 2 of the Michigan Constitution, which reads, “The legislature may by law exclude persons from voting because of mental incompetence or commitment to jail or penal institution.”

“Voters who were asked to sign the petition were not told this fact,” she said.  “The elimination of this provision would allow convicted and incarcerated felons to vote in our elections.”

Another provision of Promote the Vote’s proposed constitutional amendment would permit a voter showing up at the polls without a government-issued photo ID to sign an affidavit and vote immediately—no more voting a provisional ballot.

Under current Michigan law, casting a provisional ballot requires a voter who has not presented a photo ID to provide documentation verifying his identity to an election official within six days after the election, or the provisional ballot is not counted.

Gov. Gretchen Whitmer has publicly vowed to fight to keep abortion legal in Michigan in the wake of the overturning of Roe v. Wade by the U.S. Supreme Court.

The proposed Reproductive Freedom for All Amendment, a measure that would legalize abortion on demand at any time and for any reason, right up to the moment of birth, also was denied a place on the Nov. 8 ballot.

The two Republican members of the BSC said their decision to deny a place on the ballot for the abortion amendment was due to multiple misspelled words, the failure to use the specified and legally required font size in places, and the running together of strings of words with no spaces in between—errors found throughout the text of the proposal as it was presented to signers.

The two Democratic BSC members said that was insufficient reason to thwart the will of the hundreds of thousands of people that signed the petitions.