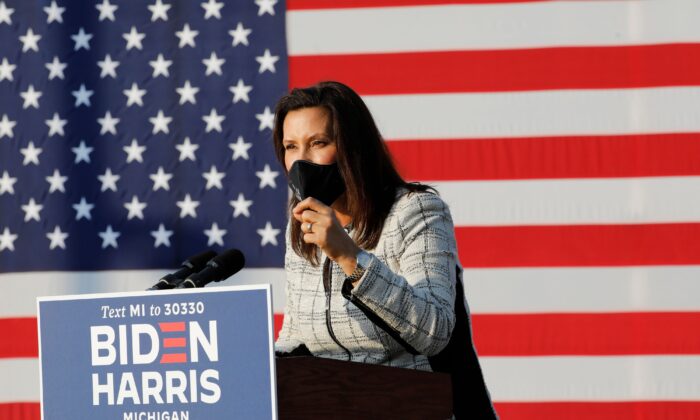 The Michigan Supreme Court ruled last week that Gov. Gretchen Whitmer, a Democrat, declared and kept extending a state of emergency without the proper authority.

“In light of the Supreme Court’s decision on Friday, the Attorney General will no longer enforce the governor’s executive orders through criminal prosecution,” Ryan Jarvi, press secretary for the attorney general, said in a statement.

“However, her decision is not binding on other law enforcement agencies or state departments with independent enforcement authority. It’s her fervent hope that people continue to abide by the measures that Governor Whitmer put in place—like wearing face masks, adhering to social distancing requirements, and staying home when sick—since they’ve proven effective at saving lives,” he added.

“If it weren’t for the governor’s actions, countless more of our friends, family, and neighbors would have been lost to COVID-19. We can respect both the court’s decision and the advice of medical experts by continuing with these important measures voluntarily.”

Nessel is the top law enforcement official in Michigan.

Other law enforcement officials in the state announced early on they wouldn’t strictly enforce Whitmer’s stay-at-home order and other mandates.

“While we understand her desire to protect the public, we question some restrictions she has imposed as overstepping her executive authority,” four sheriffs from northern Michigan wrote in a joint statement in April. “She has created a vague framework of emergency laws that only confuse Michigan citizens.”

Whitmer criticized the court ruling in a statement, calling the decision “deeply disappointing.”

“With this decision, Michigan will become the sole outlier at a time when the Upper Peninsula is experiencing rates of COVID infection not seen in our state since April,” she added, noting the ruling doesn’t take effect for 21 days.

“Furthermore, after 21 days, many of the responsive measures I have put in place to control the spread of the virus will continue under alternative sources of authority that were not at issue in today’s ruling,” she said.

But the governor “won’t let partisan politics get in the way of doing what’s necessary to keep people safe and save lives,” Brown added. “We will have more to say on this in the coming days.”

Before the ruling, Whitmer had extended the state of emergency through Oct. 27, even though the number of new CCP virus cases has sharply declined since the emergency was originally declared.

Michigan House Speaker Lee Chatfield, a Republican, was among those praising the Supreme Court ruling.

“The governor had no right to extend the state of emergency over the Legislature’s objection. Our Constitution matters, and this was a big win for our democratic process,” he said in a statement.