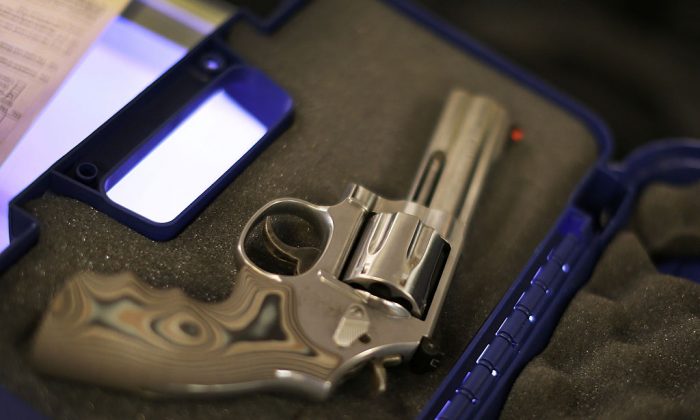 A handgun in its case in a file photo. (Joe Raedle/Getty Images)
Crime and Incidents

A 4-year-old in Michigan has died from a gunshot wound that may have been self-inflicted, police officials said.

Police officers in Roseville rushed to a home on Dort Street at 8:40 a.m. after receiving a call that a child had been shot.

A 4-year-old was found with a gunshot wound. He was rushed to the hospital but was pronounced dead.

Officers are investigating how the boy gained access to the gun; one male was seen being led away from the house in handcuffs, reported ClickOnDetroit. Multiple police vehicles surrounded the home, and caution tape was put up restricting access to law enforcement officials.

Officials weren’t sure whether the wound was self-inflicted.

Roseville Police Department Deputy Chief Don Glandon said there were other children and multiple adults in the house at the time of the shooting, reported The Detroit News.

“It’s a tragedy a 4-year-old lost his life and we’re trying to determine what transpired,” he said.

Roseville Chief James Berlin added that the scene on the street was “pretty chaotic.”

“It’s not common for children to suffer gunshot wounds in Roseville, but any incident is one too many,” he told the Detroit Free Press. “It just sickens me.”

Detectives on the scene called in for a translator to help communicate with at least some of the people inside the house, but Berlin said he wasn’t sure which language the people spoke.

A New Mexico couple is facing criminal charges after a toddler gained access to a firearm and shot a baby girl in the face.

According to a criminal complaint, Shayanne Nelson, 18, and Tyrell Bitsilly, 21, were in the shower at the Zia Motel in McKinley County on Dec. 8 when the shooting happened.

Nelson’s 3-year-old son fired the gun, hitting the 8-month-old infant in the face.

Nelson said that she wasn’t aware of a gun in the room, according to the complaint, which was obtained by KOB. She claimed a previous room occupant may have left it there.

The infant was rushed to the Gallup Indian Medical Center, where she was listed in critical condition.

Her mother told the police that she and her boyfriend ran out of the bathroom when they heard the gunshot and found the baby lying in the middle of the bed bleeding from the face.

Bitsilly described the gunshot as a “pop,” reported the Gallup Sun. He said he grabbed the child. A witness, who was found holding the child when police officers arrived at the scene, said that Bitsilly was wiping the gun clean.