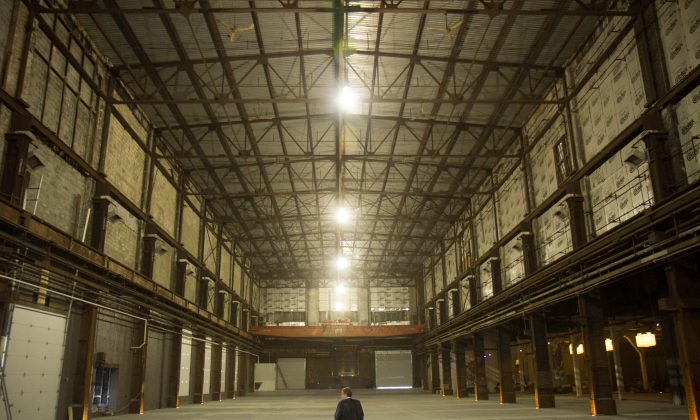 One of the rooms with 60-foot ceilings in Michelson Studio II on Midland Ave Extension in Middletown on Nov. 13, 2015. (Holly Kellum/Epoch)
New York

Largest Movie Studio in Hudson Valley to Open in Middletown

MIDDLETOWN, N.Y.—The 20 or so people who gathered for the opening of a new film and sound studio in Middletown on Nov. 13 were dwarfed in comparison to the 60-foot-high walls and 60,000 square feet of floor space.

“I flipped,” he said, describing his reaction when he saw it for the first time.

Anytime there’s a lot of production going on someplace, people move there for the work.
— Stuart Cornfeld, film producer

Michelson, a resident of Warwick, was looking to build a movie studio on Staten Island when a friend showed him this building in Middletown. He liked the fact that it had the classic East Coast look, and that the city has been so supportive of his endeavors. Mayor Joseph DeStefano was not only pleased that another historic building was being given “an adapted reuse,” he said, but is excited about the “significant” number of jobs it could create.

Those jobs could dovetail nicely with SUNY Orange’s infant television, film, and audio program called New Media, which started this September, as well as pull from local talent in the area.

It could attract professionals who are already working on productions in New York City, said Dawn Ansboro, the executive director of the Orange County Arts Council and the founder of its Film Office.

“Most of these people are commuting into the city for their jobs,” she said. “They obviously would love to stay closer to home.”

Film director and  longtime friend of Michelson, Stuart Cobfeld, said at the press conference that he has seen talent develop around film studios in places like Grand Rapids and Detroit.

“Anytime there’s a lot of production going on someplace, people move there for the work,” he said.

And it makes sense to hire locally. “It’s just better to have somebody working for you where you don’t have to pay to fly them in, put them up, and do all that,” he said. “It’s a giant, giant savings.”

Cobfeld, the business partner of Ben Stiller, is just finishing up “Zoolander II” and has worked on films such as “Dodgeball,” “Kafka,” “The Fly,” and “Elephant Man.”

He said a space as big as Michelson Studio II  is every producer’s dream.

“Especially a big movie, with period sets, outer space sets, whatever they are, you really need this kind of space,” he said. “The dimensions alone are reasons to come here.”

The space is mostly vacant, which is what film productions usually want so they can adapt it to their needs, explained Michelson. “Basically all they want is a giant bread box.”

Still, he has put a lot of work into renovating the space, said DeStefano, with more than $500,000 invested in redoing the floors, bathrooms, windows, walls, and extra lights.

As for the outside, Michelson said he was going to save money on landscaping by converting part of the yard into a “giant billiard table of water with stainless steel balls,” he said, adding he had big plans for lights outside as well.

DeStefano pledged to do some work on Midland Avenue and other arteries leading to the new studio to make the exterior “much more attractive than it is.”

Michelson, besides renting space to artists, is an artist himself. He does fine art as well as photography, and his family is well-known in the movie business and in Hollywood where he grew up.  He has been living in Warwick since the 1980s and after owning a photography studio in New York City for 27 years, wanted to try his hand at film.

They have already had companies like Netflix and ABC Studios look at the space, and Michelson’s wife, Stephanie, said they are now marketing the studios together.