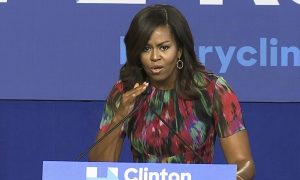 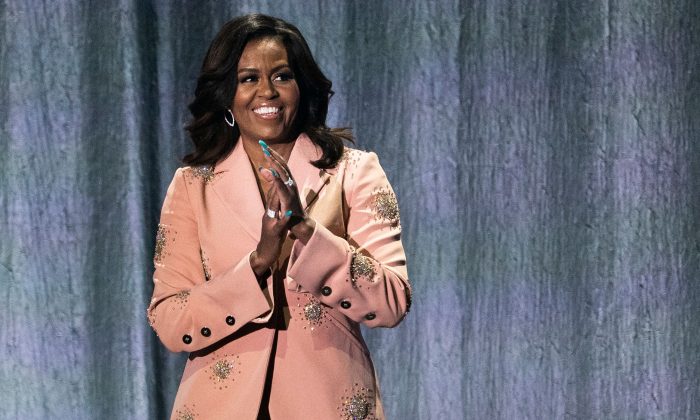 Former US first lady Michelle Obama gestures on stage of the Royal Arena during a tour to promote her memoir "Becoming" in Copenhagen, on April 9, 2019. (MARTIN SYLVEST/AFP/Getty Images)
2020 Election

A reporter with The National noted that some people want her to run for president and, while she has stated publicly before she’s not interested, wondered whether there was “even a one percent chance you’d consider running?”

“Just between us, and the readers of this magazine—there’s zero chance,” Obama replied.

“There are so many ways to improve this country and build a better world, and I keep doing plenty of them, from working with young people to helping families lead healthier lives. But sitting behind the desk in the Oval Office will never be one of them. It’s just not for me,” she added.

Obama’s husband Barack Obama served as president from 2009 to 2017.

The interview came after Democratic activist and filmmaker Michael Moore said he wanted Obama to run, despite the crowded field of over 20 contenders for the Democratic nomination to run against President Donald Trump.

Moore, during an appearance on MSNBC this week, told host Brian Williams that Obama is the “one person that would crush Trump” in 2020.

“Just go to C-SPAN and follow her book tour across the country,” he continued. “She’s playing 15,000-seat arenas in the Midwest. They have to turn people away. She takes the stage and she’s so powerful and so good. You just look at that and you think, ‘Of course. She could win.'”

Moore said it was unlikely Obama would run but wondered if anyone had inquired with her.

“Everyone’s now saying well, of course, she’s not going to run,” he told Williams. “Well, has anyone asked her? I think if she were asked, ‘Look, we’re sorry about this. We have to come back to you, you have to go back to the White House, your country needs you,’ if asked to serve, I believe she would serve.”

Michelle Obama said earlier this year that she wouldn’t run for president.

Obama told Conan O’Brien in an interview that she and her husband have lost anonymity.

“I love what you learn standing in a grocery store line and overhearing someone’s conversation. You know, watching their interactions with their loved one. Not being the watched, but watching, and taking that in and understanding life and the observations that come,” she said, reported Newsweek.

“Most of your interaction with your partner is about what you saw, what you experienced over the course of the day. For Barack and I, that’s still very limited because we’re not able to be exposed in an anonymous way in the world.”

She cited that difficulty in “learn[ing] about the world” by being anonymous as “another reason why I wouldn’t run.”

“I don’t live a normal life. I used to. Normal is very baked into me because of how I was raised, but I also know the life I’ve lived for the last 10 years is no longer normal,” Obama added. “And so I don’t know as much as I would want to, to be in a position of leadership, to kind of know what are you feeling? Because you can’t experience life behind a tinted window in a car.”

In the interview with The National, Obama noted that “being married to the president of the United States comes with its own set of challenges, but being overlooked is not one of them!”

“My life and my story have gotten plenty of attention since Barack became a public figure. And as an adult, I’ve come to realize that success isn’t measured by how many boxes you check or who notices your achievements, so I’m not really looking for any more gold stars,” she added, responding to a question about ever feeling like her work is overlooked because of who she’s married to.

“In fact, all of my proudest professional accomplishments—from helping young people enter public service to building bridges between a hospital and the community it serves—have been a result of learning to go where my passions lead me.”