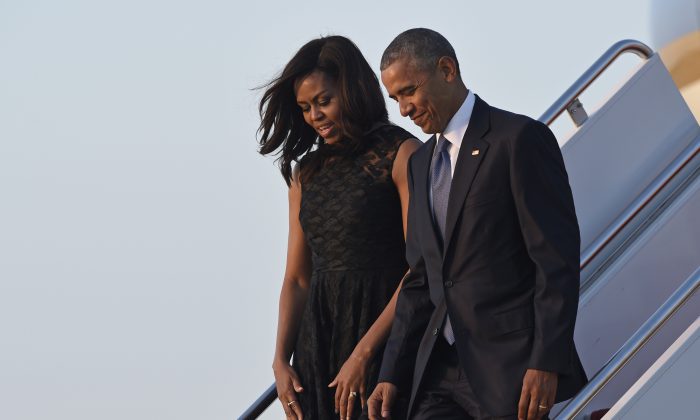 First lady Michelle Obama tries to keep her dress from blowing as she walks down the steps of Air Force One with President Barack Obama at Andrews Air Force Base in Md., Tuesday, July 12, 2016. The Obama's are returning from Dallas where they attended an interfaith memorial service for the fallen police officers and members of the Dallas community. (AP Photo/Susan Walsh)
Politics

“Michelle will never run for office,” President Obama told Rolling Stone magazine in an interview that will be published in mid-December. “She is as talented a person as I know. You can see the incredible resonance she has with the American people. But I joke that she’s too sensible to want to be in politics.”

The president made a similar comment on nationally syndicated radio show “Sway in the Morning” in October: “Michelle does not have the patience or the inclination to actually be a candidate herself. That’s one thing y’all can take to the bank.”

And David Axelrod, the Obama chief campaign strategist, echoed the president’s comment. “I would bet everything that I own against that prospect,” he said.

But, according to The Hill, three political action committees (PACs) have been created over the past month to push for Michelle Obama to run in 2020.

“The nomination process of the 2016 presidential election allowed for the selection of candidates that do not share the same poise, dignity, or popularity of Michelle Obama,” the Ready for Michelle website says. “America needs a loving healer like Michelle in order to bring together factions of our divided nation to produce policy results.”

The group was founded by Donald Garrett, a federal government employee.

The Ready for Michelle PAC is being run by five volunteers, which includes Garrett and has 1,000 signatures encouraging her to run.

Speaking for herself, Michelle told the South by Southwest festival in Austin: “I will not run for president.”

“No, nope, not going to do it,” she added after audience members complained.