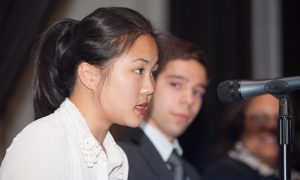 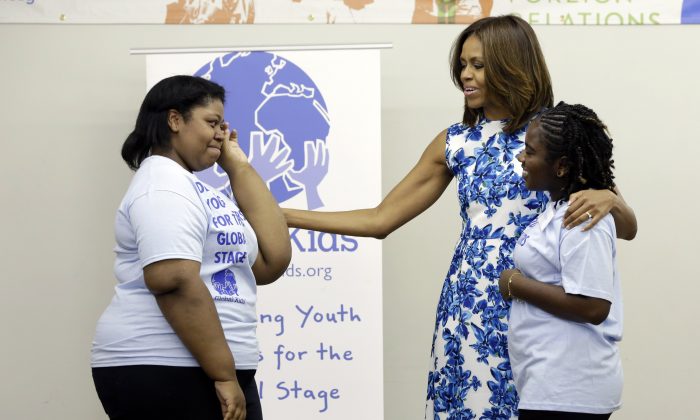 NEW YORK—The Latino community must use higher education as a tool of empowerment instead of waiting for Congress to fix a “broken” immigration system, Michelle Obama said in New York on Thursday.

The first lady spoke to about 1,500 people at the conference of the League of United Latin American Citizens at the New York Hilton Midtown.

She spoke at a luncheon to promote her Reach Higher initiative, which encourages young people to seek education after high school.

“Some of you may be wondering why I’m focusing on education today,” she said. “What I know from my own experience is that if we want to lift up the next generation, we must tackle all of these issues at the same time.”

Her speech came days after the president asked for $3.7 billion for spending on immigration and as he visited Texas to generate support for the proposal himself.

To take charge of their lives, Latinos must pursue education after high school, whether in the form of a four-year university, a two-year community college or a professional training program, she said.

“The reality is that in today’s economy, higher education is essential to getting a good job,” Obama said. Statistics show Latinos are more likely to drop out of high school and less likely to pursue advanced degrees.

She encouraged parents to make sure their kids do their homework every night and promote education as the best way for young people to support their families in the future.

Latino students should “dream big” and act as role models for others, she said.

The first lady highlighted LULAC’s history of improving education through the story of its former president, Felix Tijerina, who hired teachers out of his own pocket so Spanish-speaking students could learn English and continue their education. She emphasized that he did not wait for school boards to initiate such education improvements.

Jennifer Lopez introduced Obama at the event. The actress and musician also touted her new documentary series, Los Jets, which follows a high school soccer team composed primarily of Latino immigrants. After the luncheon, she hosted a screening of the show, which will premiere on television this month.