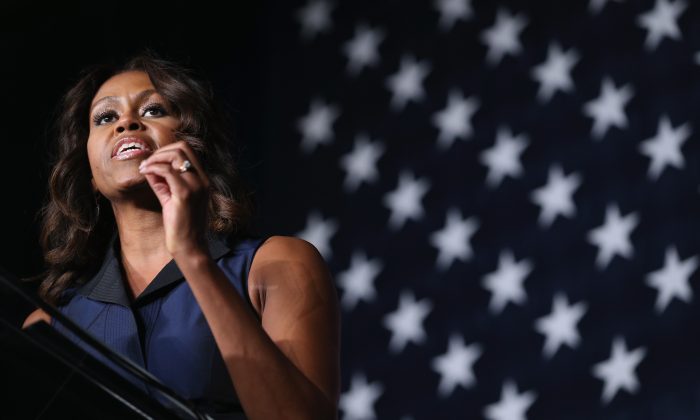 A report is saying that Republicans take taken aim at first lady Michelle Obama’s school lunch program, which has drawn protests and criticism from students around the US.

Students have tweeted their sad-looking school lunches with the hashtag “#thanksMichelleObama.”

Republicans have said the Healthy Hunger-Free Kids Act of 2010 as part of the first lady’s Let’s Move! program are not necessary and intrusive.

According to TownHall.com, Congress is looking to relax the guidelines.

Thanks @MichelleObama for this huge amount of food that’s supposed to fill me up. pic.twitter.com/eXauMDzMmN

“Some school nutrition directors have lobbied for a break, saying the rules have proven to be costly and restrictive. House Republicans have said they are an overreach, and have pushed a one-year waiver that would allow schools to opt out of the standards for the next school year if they lost money on meal programs over a six-month period,” a report from the site says.

It adds: “Republican Rep. Robert Aderholt of Alabama, the chairman of the House subcommittee that oversees the school meal spending, has been pushing to include the waiver in the wide-ranging bil.”

Meanwhile, students are continuing to post criticism against their lunches.

“We have a bunch of crap everyday for lunch,” said one student on Twitter.

However, the Let’s Move! campaign director Sam Kass said many kids do get good food.

“We’ve seen thousands of examples of healthy, delicious school lunches that meet the new standards being made across the country by talented school chefs,” Kass told the Standard Examiner.

“Student complaining about school lunch is nothing new — it has nothing to do with the new lunch standards.”