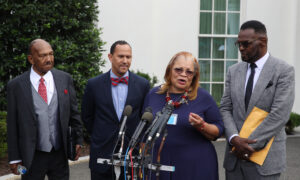 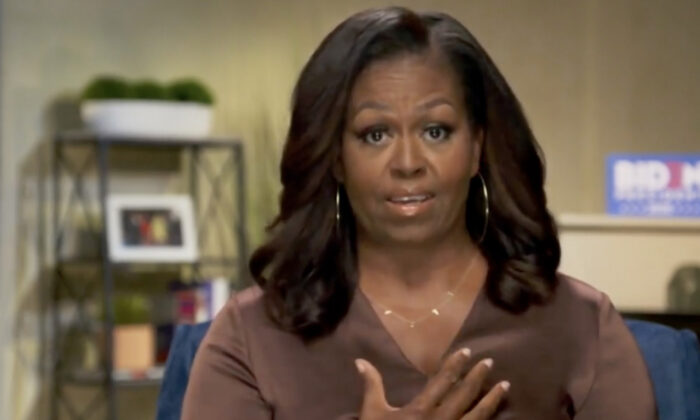 In this screenshot from the DNCC’s livestream of the 2020 Democratic National Convention, Former First Lady Michelle Obama addresses the virtual convention on Aug. 17, 2020. (Handout/DNCC via Getty Images)
2020 Election

The AP said in its fact check that the former first lady “assailed President Donald Trump on Monday for ripping migrant children from their parents and throwing them into cages, picking up on a frequent and distorted point made widely by Democrats.”

“She’s right that Trump’s now-suspended policy at the U.S.-Mexico border separated thousands of children from their families in ways that had not been done before,” the AP fact check added. “But what she did not say is that the very same ‘cages’ were built and used in her husband’s administration, for the same purpose of holding migrant kids temporarily.”

AP added that Obama’s reference to “cages” is a “misleading” one that is frequently mentioned by Democratic politicians.

“Trump used facilities that were built during the Obama-Biden administration to house children at the border. They are chain-link enclosures inside border facilities where migrants were temporarily housed, separated by sex and age,” AP fact-checkers said.

It noted that photos of children in housing centers that were circulated by Democratic officials online to criticize Trump were actually taken in 2014.

These pictures actually “depicted some of the thousands of unaccompanied children held by President Barack Obama,” AP said.

In her speech, Obama touted Joe Biden’s record when he was vice president and said he “knows what it takes to rescue an economy, beat back a pandemic, and lead our country.”

President Trump wasted no time in responding to the former first lady’s speech on social media.

“Somebody please explain to @MichelleObama that Donald J. Trump would not be here, in the beautiful White House, if it weren’t for the job done by your husband, Barack Obama,” Trump wrote on Twitter. “My Administration and I built the greatest economy in history, of any country, turned it off, saved millions of lives, and now am building an even greater economy than it was before. Jobs are flowing, NASDAQ is already at a record high, the rest to follow. Sit back & watch!”

Biden and his vice presidential pick, Sen. Kamala Harris (D-Calif.), are widely expected to be nominated. Both are expected to speak at the event, which is mostly being held virtually due to the COVID-19 pandemic.

The Republican National Convention is scheduled for Aug. 24 until Aug. 27.