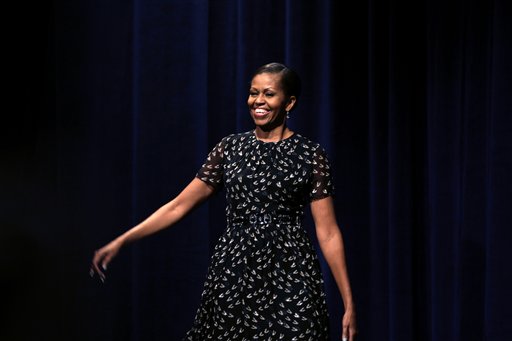 First lady Michelle Obama arrives to speak about childhood obesity, Tuesday, July 23, 2013, at the annual meeting of the National Council of La Raza, in New Orleans. The conference and a related "Family Expo" were expected to draw an estimated 25,000 participants. (AP Photo/Gerald Herbert)
US

Michelle Obama canceled a trip to Los Angeles amid the government shutdown. Obama’s trip was for a Democratic fundraiser.

Obama, who was slated to appear in Los Angeles on Friday, was scheduled to hold a $32,000 per head political fundraiser for the Democratic National Committee, reported the Hollywood Reporter.

The fundraiser was to be held at “Everybody Loves Raymond” creator Philip Rosenthal’s home in Hancock Park.

She was also forced to cancel plans with House minority leader Nancy Pelosi in San Francisco.

The White House canceled Obama’s plans likely due to the government shutdown.

Normal government-based transportation has been cut off due to the shutdown and privately financed travel has also been placed on the “back-burner” by the first family, as the Reporter notes.

According to NBC, Michelle Obama was scheduled to spend time in San Francisco also to raise money.

A political science professor said Obama’s decision was likely the best thing to do given the current situation.

“I think right now with everyone worried about the shutdown, not knowing how long it’s going to last, to look like we’re acting like everything’s normal, we’re going to keep fundraising, we’re just going to think about the next election, it looks like the party is not focused enough,” Menlo College political science professor Melissa Michaelson said.