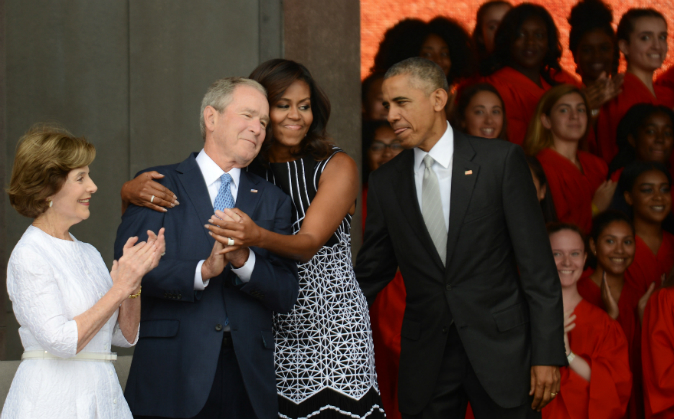 The image of First Lady Michelle Obama hugging former President George W. Bush at a ceremony to open the National Museum of African American History and Culture on Sept. 24, is the latest in a string of exchanges between the two to go viral on social media.

People really had a fit about Michelle Obama giving GWB a church side-hug. Y’all must have never been to a black church.

When your girlfriend cooking and you hug her from behind https://t.co/tB18k9H7e5

Photoshopped images of Bush replaced with Donald Trump, Brad Pitt, and Michelle Obama herself have also sprung along with it.

The Obama and Bush families have met frequently throughout the last eight years, most recently in Dallas for a memorial service for the five police officers killed by a sniper in July. As Bush held Michelle’s hand while singing “The Battle Hymn of the Republic,” he could be seen swaying and swinging his arms. The seemingly jovial behavior was deemed inappropriate by social media users.

“Is George Bush dancing on stage at the ceremony honoring the #Dallas police officers?? That was absolutely bizarre,” wrote one Twitter user.

“George W Bush dancing (drunkenly?) at a funeral while Michelle Obama tries to keep composure is pretty much THE metaphor for America today,” tweeted one social media user.

While the interaction between the Obama and Bush families are open for interpretation online, their friendship shows a shared bond they have as First families.

“I think what is obvious from the photo is that Mrs. Obama has genuine affection for former President Bush,” White House Press Secretary Josh Earnest said on Sept. 26, reported USA Today.

“But I think it’s a reminder that people who have different views but who love their country can find ways to cooperate in ways that are good for the country.”

Bush has been serving as a consultant to the Obama family in their preparations for leaving the White House, according to David Axelrod, a former adviser to President Barack Obama.

“President Bush was very gracious to us during the transition, and he has been unfailingly gracious and respectful since,” Axelrod told the New York Times, adding that the Bushes “had taught [Barack Obama] lessons in how to be a former president.”