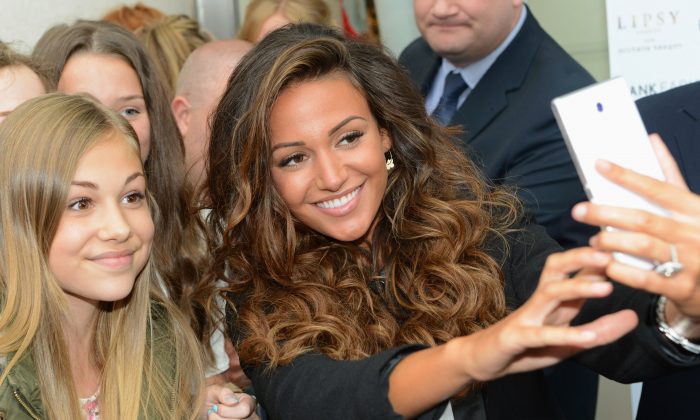 Michelle Keegan poses for a selfie with a fan during a photocall to open the new BANK Liverpool One store on August 1, 2014 in Liverpool, England. (Richard Martin-Roberts/Getty Images)
UK

Michelle Keegan has not been targeted in the massive nude photos hack despite early reports that she was one of the victims.

A so-called master list of names of women targeted in the hack was published and Keegan was on it but a spokesperson denied that Keegan is one of the victims.

“There’s no evidence that Michelle’s phone or computer has been hacked and nothing has appeared online to suggest she has either,” the spokesperson said, noting that Keegan is aware of her name being on the list.

There don’t appear to be any pictures labeled with Keegan’s name on 4Chan or Reddit, the two websites doing the bulk of the sharing of the pictures.

Celebrities in the United Kingdom appear to have escaped unscathed from the attack. Cara Delevingne and Kelly Brook are among the other British names on the list, but no actual pictures of any of the women appear to have shown up, at least yet.

It’s rumored that the hacker(s) are lying low before leaking more photos, perhaps hitting some more names on the list.

Authorities in the United States, including the FBI, are searching for the person(s) responsible.

The pictures reportedly became available after an iCloud security issue, although Apple later said that it hadn’t found evidence of an issue but that the specific celebrities’ were targeted.

“When we learned of the theft, we were outraged and immediately mobilized Apple’s engineers to discover the source. Our customers’ privacy and security are of utmost importance to us. After more than 40 hours of investigation, we have discovered that certain celebrity accounts were compromised by a very targeted attack on user names, passwords and security questions, a practice that has become all too common on the Internet,” the company said in a statement on Tuesday.

“None of the cases we have investigated has resulted from any breach in any of Apple’s systems including iCloud or Find my iPhone. We are continuing to work with law enforcement to help identify the criminals involved.”