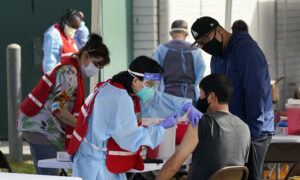 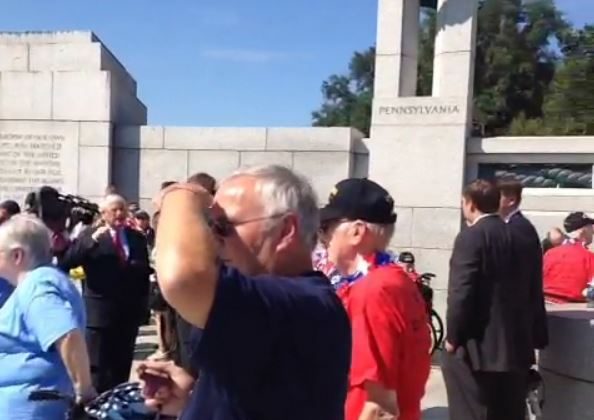 World War II veterans and others inside the World War II Memorial in Washington, D.C. on Tuesday. (Screenshot/Vine)
US

Reps. Michelle Bachmann, Bill Huizenga, Steve King, and Tom Harkin were all on hand when Mississippi World War II veterans stormed the World War II Memorial in Washington D.C. amid a government shutdown. King apparently “distracted” a guard while the veterans knocked down fences to get inside, said a witness.

“We’re very excited… It’s exactly what we wanted, and we got it,” Bachmann (R.-Minn.) said at the memorial on Tuesday, according to the Political Line website.

Bachmann and other lawmakers will be at the stie “today, tomorrow, the next day, however long it takes” to keep the memorial open, she told CNN. “The last thing we should see in America is a barricade for World War II veterans to be prevented from coming to their memorial,” Bachmann added.

“America is not shutting down,” she said. “If we have anything to say about it, we’re going to keep this open.”

The veterans, who are from Mississippi were attempting to visit the memorial, but it was closed down due to the government shutdown that was placed in effect on Tuesday.

A witness said that Rep. King (R.-Iowa) helped “distract a park police officer” while veterans “knocked down the fences,” according to the Talking Points Memo website.

On Twitter, witness Leo Shane III wrote: “Honor flight vets just knocked over the barriers at the WWII memorial to get inside, #shutdown or no.” He added, “Tons of applause as the WWII vets from Miss. storm their memorial. Park police on the way.”

The photos of the veterans went viral on Twitter, with some users suggesting that Republicans are trying to take responsibility for the move.

Ethan Clapper, the social media director with The Huffington Post, wrote: “Are conservative Republicans trying to own this?” However, it’s worth pointing out that Rep. Harkin is a Democrat from Iowa.