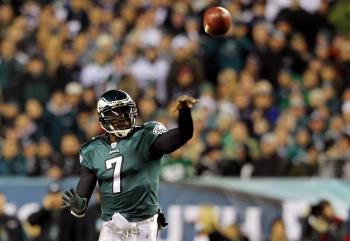 Michael Vick told NBC last week that he felt he 'cheated' the Atlanta Falcons organization. Above, Michael Vick #7 of the Philadelphia Eagles passes against the New York Giants at Lincoln Financial Field on November 21 in Philadelphia. (Michael Heiman/Getty Images)
NFL

By Mimi Li
biggersmaller
Print
Michael Vick, the Philadelphia Eagles starting QB, recently said in an interview with NBC that he felt he “cheated” the Atlanta Falcons organization and that he didn’t give 100 percent off the field despite giving it his all on the gridiron.

"I feel like I cheated the organization," Vick told NBC’s Bob Costas in an interview aired during Sunday night’s Football Night in America. "I didn't give them my all. I gave them everything on the field, 100 percent, but sometimes that's not enough."

Vick, who played for the Falcons from when he was drafted by the franchise in 2001 until 2006, had a rocky separation from the organization when he was jailed for nearly two years on felony dog fighting charges, leading the Falcons to cut ties with the three-time Pro Bowler.

Given a second chance by the NFL, Vick signed with the Philadelphia Eagles in 2009, and has certainly taken advantage of the opportunity, leading the Eagles to a 7-3 record while throwing for 11 TDs with no interceptions, rushing for 5 TDs, and posting a league-high 108.7 QB rating.

The former Virginia Tech star said that he’s put much more time and effort into football with the Eagles, and his performance this year has launched him firmly into the MVP conversation.

“This time around, I just wanted to work harder than I ever worked before, not shortchange myself,” he said. “I didn’t put in the work and the time and the effort. I didn’t dedicate myself the way I do now.”

Vick and the Eagles’ next game will be against the Chicago Bears at Soldier Field on Sunday, Nov. 28 at 4:15 p.m. EST.