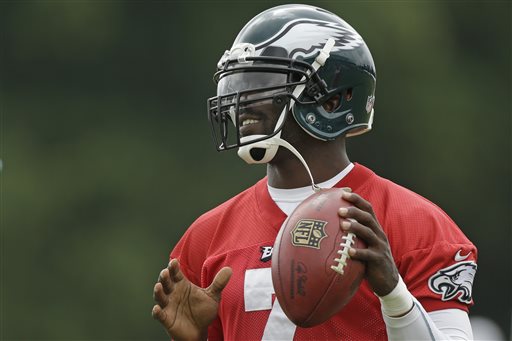 Michael Vick did not break both his legs in a car crash, as a death hoax article would like you to believe. Vick was forced to write that he’s “fine” on his Twitter on Monday after rumors spread over the weekend.

According to a “report” from the Global Associated News–a fake news site with articles about celebrity deaths or injuries–Vick suffered a catastrophic injury to both legs.

“A spokesperson for the Philadelphia highway safety authority (HSA) has confirmed that Michael Vick has broken both of his legs in a traffic altercation,” the fake news article reads, which has since gone viral.

But at the bottom of the story, it says: “FAKE… THIS STORY IS 100% FAKE! this is an entertainment website, and this is a totally fake article based on zero truth and is a complete work of fiction for entertainment purposes! this story was dynamically generated using a generic ‘template’ and is not factual.”

A number of Twitter users retweeted the story. “Hope all is well Michael Vick, this is crazy! This car got ripped in 2 smh,” one reads.

Vick was forced to respond on Monday.

“I don’t know where these rumors start but I’m doing great. No accident or broken legs. Thanks for the concerns! #BleedGreen #Blessed,” he wrote.

The Global Associated News generates its content from the FakeAWish website, which allows users to input the name of a famous person to get a hoax report.

Other notable hoaxes spawned by the website this year have targeted Peyton Manning, Aaron Rodgers, Jared Leto, Denzel Washington, and and other celebrities.

Vick seems to be a frequent target of false Internet rumors. In 2012 and several months ago, similar rumors claimed he broke both his legs in a car accident.

“Yea! I heard it a few months ago too. Smh! Crazy,” Vick wrote on Monday.

Rich Hoover, who apparently owns the Global Associated News, told the New York Times several years ago that he gets advertisement revenue from fake articles that go viral.

“I’d be lying if I said there wasn’t some twisted sense of satisfaction or accomplishment,” he said.

Mark Bell, who serves as an adjunct professor at Indiana University-Purdue University Indianapolis, told the Times that people create the hoaxes because they get a rush from lying.

“They get a thrill from it. There is a little hit of dopamine when you lie, especially a lie that is believed by somebody else,” he told the paper.