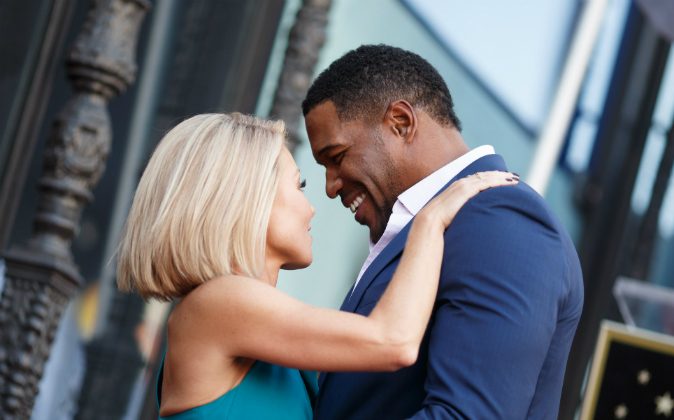 An era where the signage reads “LIVE! With Kelly and Michael” is over, as today was Michael Strahan’s last day on the morning talk show.

The events that led to this final moment has been tumultuous to say the least, but the duo were able to put their differences aside to bid the former NFL athlete adieu. The pair walked out holding hands during the May 13 broadcast.

“We did it. We made it out here, at least,” Strahan said.

“Guys, guys don’t take this as a bad sign. It’s Friday the 13th,” Ripa told the audience. “We came to celebrate with you. And we want to remind the audience that there is discounted merchandise at the kiosk for these collector’s items.”

Strahan, who referred to his last day as “bittersweet” assured viewers that he’ll still be a part of their lives.

“I didn’t anticipate being here at this point, but it’s here and we’re going to enjoy it,” he said. “I’m not dying! I’m still in the family! And I’m still available to come back if I’m ever called to co-host so I’m not going anywhere. I’m not gone.”

A joking Ripa took the former pro athlete up on his offer:  “I start vacation in a couple of weeks!” she said, as Strahan said with a laugh, “I don’t know about that—too soon.”

“Anyway, during the show we’re going to have some flashback moments,” Ripa revealed. “We’re not going to go too far back.”

Strahan added, “I think that we come out here every day and we do our host chat and we make people laugh, I think that’s what we need to do right now, forget all the other formalities and get on with the show.”

And that they did with conversation that included the size of retired NBA star Shaquille O’Neal’s bed and Kelly Ripa feet dangling from a hotel’s toilet.

A few moments later, the show launched into the first take of “Michael’s Flashback Friday Farewell,” playing highlights of Strahan and Ripa co-hosting over the years, including a time where Ripa measured Strahan’s tongue and Strahan gave away a free trip during the on-call trivia games.

“[Executive Producer] Gelman wants me to remind you before you leave, you do owe him $8,000,” said Ripa in reference to the free trip.

First guest actor Matt Bomer then came out and praised Strahan for his time on the show.

“I’m going to be a little sappy to start this off and thank Michael for helping the great, unrequited love of my live, Kelly Ripa, host this show for four years,” Bomer said. “Whether you’re all dapper or in a gold lamé thong on the set of ‘Magic Mike,’ you always carry yourself with a real grace and dignity.”

He sung high praises for Ripa as well.

“My girl is the best in the business. And I’m so excited to see how the show goes,” he said. “And it’s all good.”

NBA player and New York Knicks star, Carmelo Anthony, also made an appearance on the show in which he spoke about the upcoming Puerto Rican Day Parade and his new film, “Teenage Ninja Mutant Turtles.”

Later in the show, Ripa announced the next segment of their Flashback Farewell, recalling the first time Strahan appeared on the show.

“On September 4, 2012, this man right here, bolted into the studio. You remember? Yeah. And a new chapter of the ‘LIVE!’ story began,” Ripa said. “During the past few years, we’ve had a lot of fun. We’ve made a lot of memories and we’ve even learned a thing or two about Michael Strahan. Michael, this is your life.”

A video montage of Strahan laughing, speaking in different accents, wearing red thigh high boots from Broadway’s “Kinky Boots,” participating in a Tough Mudder competition live on air, the unveiling of a life-size wax figure of Strahan, and “unforgettable moments” that included an interview with President Obama and an Emmy win.

Ripa also gifted Strahan with parting mementos, that included bronzed size 16 heels and a photo book of their moments together

“Look at all we did together,” Ripa told Strahan as she began to flip through the book. “I mean, we did everything together. I just want to say on behalf of myself and all of us, we couldn’t be prouder of you.”

“You have given us so much joy in the mornings from your smile to your sense of humor to your horrible French accent, she continued as they both held flutes of champagne. “We really are so, so proud of you. We’ve achieved so much together. And I look forward to watching you every morning and seeing what else you achieved over at ‘Good Morning America’.”

The countdown to May 13 began mid April when Strahan blindsided Ripa with news that he will no longer serve as her partner in crime and will join GMA this fall.

A flabbergasted Ripa was a no show on a few following airings, taking time to sort out her thoughts and feelings regarding Strahan’s surprising departure.

“I really needed a couple of days to gather my thoughts after 26 years with this company—I earn that right. In that time, I gained some perspective. I always speak from the heart. I didn’t want to come out here and say something I might regret,” she said when she returned to the ABC talk show after nearly a week of absence.

She reiterated the same points in an interview with People, but also said she had no ill feelings towards Strahan or ABC executives.

“I’m not dealing with monsters. I don’t think of anybody as a monster or out to get me,” said the former soap opera actress. “We’re excited for Michael. He wanted that job, and it’s great for him. I think it is a perfect match, I really do.”

Strahan begins at Good Morning America in September, and as he made his final appearance as a permanent host on “LIVE!” he expressed gratitude to the show that allowed him to transition from sports to television.

“I just want to say—and I just want to—it’s very bittersweet for me. I want to say thank you to everybody. I mean, it’s amazing. You come here and you guys have let me into your homes the last four years every day and I didn’t know what to expect coming from sports to daytime television,” he emotionally recounted.

“And you guys opened up your hearts to me and you opened up your homes to me and it’s been so overwhelming with the response that we’ve had over the last four years that you guys have loved this show. And it means the world that you give us an hour of your day and what you don’t realize, we get more from that hour than [you], we really do. We sit in front of a live audience who I always say during our commercial breaks, they are the third co-host of the show.”

“The energy that they bring really makes this show work. And it is not about myself. It’s not about you. It’s about everybody here,” the former NFL star added. “We have incredible staff here. We have from the producers to the staff to the crew. They make sure we’re always prepared [so] that we can come out here and put on a great show for you guys.”

Jimmy Kimmel and comedian Cedric the Entertainment are scheduled to appear as guest hosts next week.