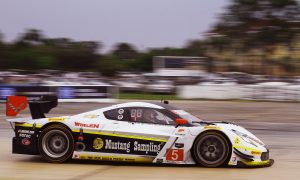 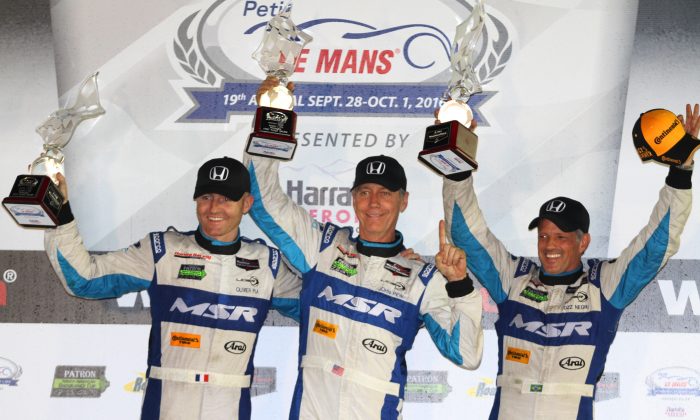 The Extreme Speed team was the pre-race favorite, having won the two other extreme endurance races of the season, the Twelve Hours of Sebring and the Rolex 24 at Daytona. ESM came on strong in the later laps of the race but couldn’t close the gap to the speeding Shank car.

Mazda Motorsports nearly made the podium a an LMP2 sweep, but the #70 Mazda Prototype burst into flame halfway through a lap with 14 minutes left in the race, handing third place to the #10 Wayne Taylor Racing Dallara-Corvette. The Mazda ended up being scored in seventh.

The win secured for Shank Racing the North American Endurance Cup, awarded for the best performances throughout the series’ four longest races, a total of 52 hours of racing. Because the #60 Shank Ligier led most of Petit Le Mans, the team earned enough points to pass both top contenders, ESM and #5 Action Express Racing Coyote-Corvette. The #5 Action Express car finished fifth in the race.

Most of the race was a three-way battle between MSR and the two Action Express cars, the #5, driven by Joao Barbosa, Christian Fittipaldi, and Filipe Albuquerque, and the #31 driven by Eric Curran, Dane Cameron, and Simon Pagenaud. These two Action Express teams were contesting the series championship, with the #5 squad coming into the event with a one-point lead. The #31 finished fourth, one place ahead of its team mates and rivals, winning the class championship.

The #62 Risi Ferrari 488 GTE driven by Giancarlo Fisichella, Toni Vilander, and James Calado finished 16 seconds ahead of the #66 Ford Ganassi Racing Ford GT of Joey Hand, Dirk Mueller, and Sebastien Bourdais, and another two seconds ahead of the #4 Corvette Racing C7.R of Oliver Gavin, Tommy Milner, and Marcel Fassler. These three teams traded the lead throughout the race, with the Ferrari leading the most laps and holding the final advantage.

While they didn’t win the race, the #4 Corvette crew scored a trifecta, winning the GTLM class Driver, Team, and Manufacturer titles.

Bleekemolen battled hard through the closing laps of the race against Andy Lally in the #44 Magnus Racing Audi R8 LMS GT3, finishing just a few seconds ahead. However, the Magnus car was sent to the back of the field for failing to meet minimum driver-time requirements.

This gave second in class to the #73 Park place Porsche 911 GT3-R driven by Jorg Bergmeister, Matthew McMurry, and Patrick Lindsey, though the car was a lap down.

Petit Le Mans marks the end of a season of arcing and the end of an era for the IMSA WeatherTech Sportscar Championship. Major changes are on the way for what has become North Americas premier sports car endurance-racing series.

The fastest class, the prototype class, will be totally replaced. The current class is a blend of the top classes from WSC’s two component series: P2s from the American Le Mans Series and Daytona Prototypes from the Rolex Sports Car Series. While IMSA management did wonders to balance these two fundamentally different chassis, the situation was always seen as a stop-gap.

2017 brings t the new top class, the Daytona Prototype international formula (DPi.) Based on the new FIA LMP2 chassis, DPis will have manufacturer-specific bodywork and a wide variety of powerplants. Also racing in the top class will be FIA-legal LMP2s using the bespoke Gibson racing engine. Current P2s will be grandfathered in for one season, but will not be competitive against the more modern and more powerful P2s and DPis.

The divide between P2s and DPs—both between teams and fans—was the biggest issue facing the fledgling series. IMSA could not afford to have its fan base divided, but also could not alienate any of the top teams from either of the component series—and those teams could not afford, nor were willing to buy and test completely new cars (and all the attendant spare parts) to compete in the new series.

IMSA management did an heroic job to maintain a semblance of baance between the two types of cars, but true parity was impossible, which meant that whoever loss would have to wonder if the rules or the competition decided the race.

IMSA will still have to balance different chassis and power plants, but hopefully this balance can be addressed fairly in the regulations via equivalency factors between engines of different displacements, configurations, and induction systems.

All the cars will use one of four approved LMP2 chassis designs (once the current P2s are retired) and all bodywork will be approved in advancwe by either the FIA or IMSA.

What this means is that teams will be able to show up and race, without worrying about race-to-race performance adjustments, and fans will know that the winning car really was the best car, with the best driver and crew (and luck, of course.)

The Prototype Challenge class will be radically transformed and moved to its own series. The aging spec Oreca FLM09s will be replaced with FIA-legal LMP3 machinery from a variety of manufacturers. The new PC class will continue to provide developing drivers with the experience of driving a high-downforce sportscar with a powerful V8 engine, and will also offer experience in multi-class racing, and the new series will include the current Mazda four-cylinder-powered Elan DP02 from the Prototype Lites series.

The benefit is that this training class will not be competing on track with the top-tier prototype and GT drivers, which should provide a better learning environment and cause fewer incidents during races.

The new chassis start testing in Daytona in November, and the 20127 IMSA WeaterTech Sportscar Championship kicks off officially in early January with the Roar Before the 24.