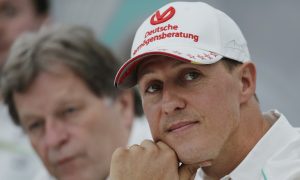 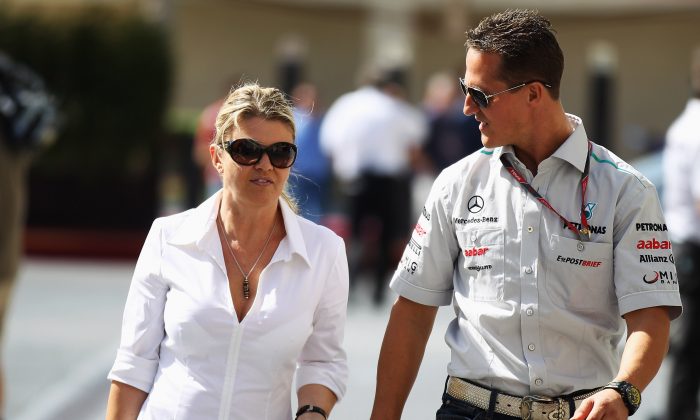 The wife of former racing driver Michael Schumacher released a rare statement ahead of his 50th birthday on Jan. 3.

Corinna Schumacher thanked fans and said the family was “doing everything humanly possible to help him” recover from a skiing accident he had in 2013.

“Please understand if we are following Michael’s wishes and keeping such a sensitive subject as health, as it has always been, in privacy.

“At the same time we say thank you very much for your friendship and wish you a healthy and happy year 2019.”

“We are very happy to celebrate Michael’s 50th birthday tomorrow together with you and thank you from the bottom of our hearts that we can do this together,” Corinna wrote.

The driver suffered devastating head injuries after hitting his head on a rock while skiing in December 2013, splitting his helmet open. Medics said he had sustained blood clots to the brain but said he would almost certainly have died if he hadn’t been wearing a helmet.

Following several surgeries, he spent six months in a coma before waking up and being taken to a private location in Switzerland in April 2014.

The Facebook post is a rare public statement from Corinna, who commented just once before when Schumacher was released from hospital. At that time she asked for support in “our joint fight alongside Michael,” but also stressed the need to respect the family’s privacy.

Formula 1 managing director Ross Brawn, who worked with Schumacher at Ferrari, told the BBC, “I am constantly in touch with Corinna and I totally agree with their decision. Michael has always been a very private person and that’s been a guiding principle in his career, his life. His family always agreed with that choice.”

Corinna has been married to Michael since 1995 and they have two children, Gina-Maria, 21, and Mick, 19.

Gina-Maria is a professional horse rider and Mick is a Formula 3 racing driver.

In 2013, Schumacher told a German TV station that he and his wife had never had a serious argument.

“It’s because we share the same values. During all the time I was racing she was my guardian angel,” he said.

In January 2018 Gina-Maria posted a message on Instagram in celebration of her father’s 49th birthday.

She wrote, “Happy Birthday to the best Dad ever. We love you. #keepfighting.”

In an undated note from Corinna to musician Sascha Herchenbach, she said her husband was a “fighter.”

“It is good to receive so many kind wishes and other well-intentioned words—which is a great support for our family. We all know Michael is a fighter and will not give up,” she wrote in the note, which was revealed by German magazine Bunte in November 2018.

According to MailOnline, Schumacher is being cared for by a team of 15 healthcare professionals providing 24/7 care at a cost of $145,000 a week.