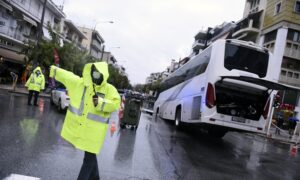 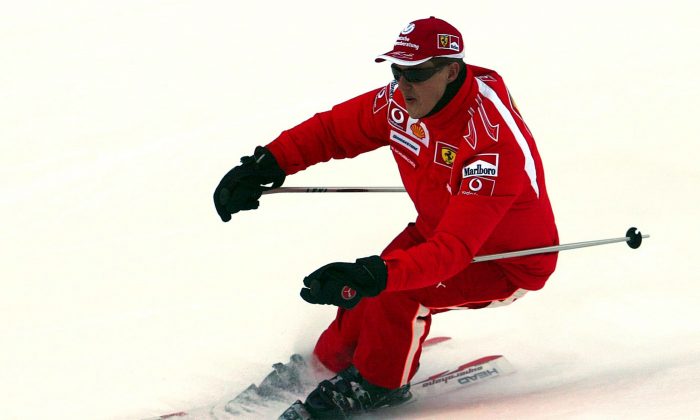 In this Thursday, Jan. 12, 2006 file photo provided by the Ferrari press office, Formula One driver Michael Schumacher of Germany speeds down a course in the Madonna di Campiglio ski resort, in the Italian Alps . French radio says retired Formula One champion Michael Schumacher has been injured in a skiing accident. RMC radio reported Sunday Dec. 29, 2013 that the seven-time champion had fallen while skiing off-piste at the French Alpine resort of Meribel. The radio quoted resort director Christophe Gernigon-Lecomte as saying that Schumacher was wearing a helmet when he fell and hit a rock. (AP Photo/Ferrari, File)
Europe

Michael Schumacher’s medical records were stolen recently, according to reports. French officials said they need the public’s help in locating them.

Schumacher, 45, was transferred from a hospital in France to Switzerland’s Lausanne’s university hospital last month. He had spent the past six months in a coma and came out of it recently.

A report from German-language publication Bild said the medical records may have been a draft, which contained spelling errors. “Apparently, the perpetrator has copied the faulty documents and made them available for purchase,” a translation of the report says.

A French prosecutor, Jean-Yves Coquillat, told AFP: “Nobody has been identified as the author of these acts.”

“The investigation continues and is far from having concluded,” added Coquillat.

The person or group who claims to have the documents is using the moniker Kagemusha, and they have offered to sell them off for 40,000 euros.

Kagemusha is a film that was directed by legendary Japanese filmmaker Akira Kirosawa in 1980.

Swiss media reported that police have determined that the IP address of the person who sent the e-mail about Schumacher’s medical documents is located in Zurich.

The family “would like to explicitly thank all his treating doctors, nurses and therapists in Grenoble as well as the first aiders at the place of the accident, who did an excellent job in those first months,” manager Sabine Kehm’s latest statement said.

“The family also wishes to thank all the people who have sent Michael all the many good wishes. … We are sure it helped him,” it added. “For the future we ask for understanding that his further rehabilitation will take place away from the public eye,” it added.

Much remains unclear about Schumacher’s future as well as the length and extent of his recovery.

“If he’s been released from the hospital he was in, it means he’s able to support his own breathing and bodily functions,” said Dr. Tipu Aziz, a professor of neurosurgery at Oxford University’s John Radcliffe Hospital.

The fact that Schumacher is going into rehabilitation “suggests there’s been long-term side effects of his injury,” he added.

“With rehabilitation, they’ll try to train him to cope with the disabilities that he’s got to achieve as much life function as possible,” Aziz said. “If he’s had a brain injury, he may have weakness in his limbs secondary to loss of brain function. He may have problems with speech and swallowing.”

He said that “rehabilitation would probably take a good few months” but noted that Schumacher was an athlete before his accident “so was in good shape.”

Schumacher earned universal acclaim for his uncommon and sometimes ruthless driving talent, which led to a record 91 race wins. He retired from F1 racing in 2012 after an unmatched seven world titles.