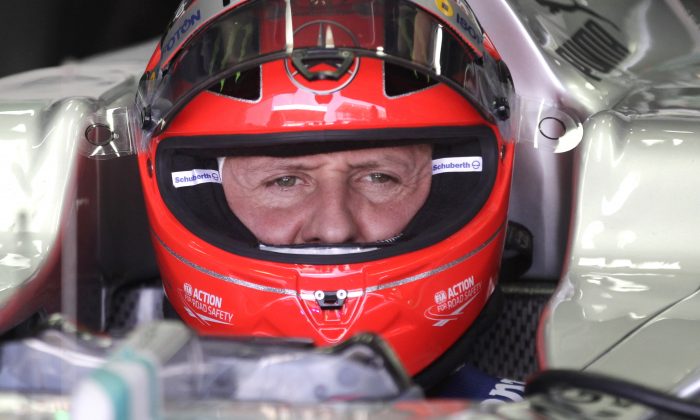 There’s been no new updates in the condition of Michael Schumacher, the seven-time Formula One champion, who has remained in a coma since late December.

However, a clip of Schumacher’s last interview–posted last year–has drawn the attention of fans.

A few weeks before Schumacher was involved in a ski accident that left him in a coma, he tested and drove the 2015 C-Class Mercedes. He was asked to crash the car but failed to do it. “We have simulated various accident procedures you could have,” the F1 champ says in the video. He was made the Mercedes brand ambassador in 2013.

Schumacher was gravely injured while skiing in the French Alps in late December. He was placed into a medically induced coma so doctors could operate.

Last week, there was a report in Spanish that said he woke up from the coma, but those were shot down by his manager in a later report. Bild.de reporter Nicola Pohl also tweeted that that Spanish-language RTL’s story wasn’t accurate.

“Sorry. but those rumors from Spain are apparently not true,” Pohl told Auto Week. His manager “just texted me (saying) she hadn’t confirmed anything to RTL,” Pohl also said.

“It’s hard for me to talk about it,” he said, reported SpeedWeek. “I’m still shocked. Michael’s accident shows can change things such as fast. “

A few weeks ago, Schumacher’s manager Sebine Kehm said, “We remain confident that Michael Schumacher will make it through and wake up.”

She added: “Of course I am not a doctor, but medically, there is a distinction between being awake and being conscious, the latter meaning there is an ability to interact with his surroundings. I don’t want to disclose details out of respect for the family, but we have no doubt at all in the abilities of the doctors treating Michael, they are experts in their field.”