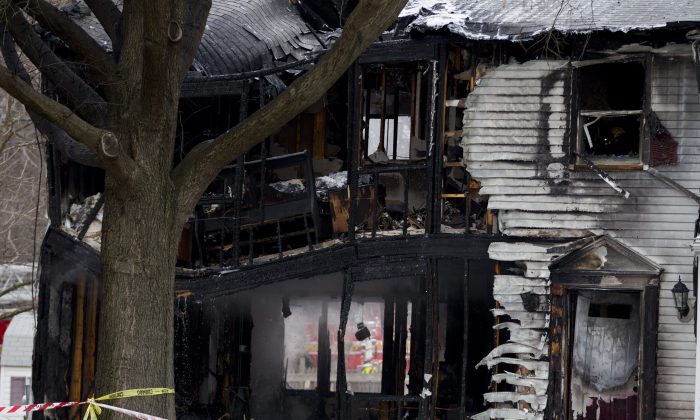 Firefighters stand outside a smoking house where a small plane crashed in Gaithersburg, Md., Monday Dec. 8, 2014. A small, private jet has crashed into a house in Maryland's Montgomery County, and a fire official says at least three people on board were killed. (AP Photo/Jose Luis Magana)
US

Michael Rosenberg, the CEO of Health Decisions Inc. of North Carolina, was identified as the pilot of the plane that crashed in Gaithersburg, Maryland, on Monday.

Six people were killed in the plane accident, including three from inside the house and three in the plane.

Fox 5 news reported that Rosenberg was piloting the aircraft when it crashed.

GAITHERSBURG, Md. (AP) — The founder and CEO of a North Carolina clinical research organization was among those killed in a crash of a small, private jet in Montgomery County.

Health Decisions of Durham, North Carolina, said in a news release that Dr. Michael Rosenberg was among those killed in Monday morning’s crash near Montgomery County Airpark in Gaithersburg.

Authorities say Rosenberg was among three people on the plane who were killed when it crashed into a house. Three people in the house were also killed.

GAITHERSBURG, Md. (AP) — Authorities say a woman and her two young sons were at home when a private jet slammed into their house and were among six people killed in the crash in Maryland’s Montgomery County.

Montgomery County Police Chief J. Thomas Manger says the woman’s two sons were a month-old infant and a 3-year-old, and their last names are Gemmell.

Three people were aboard the jet when it crashed Monday into the home in Gaithersburg, a Washington, D.C., suburb. The two-story, wood-frame home was gutted by the impact of the crash and ensuing blaze.

Neighbors and property records identify the home’s residents as Ken and Marie Gemmell.

A National Transportation Safety Board team is investigating the crash.