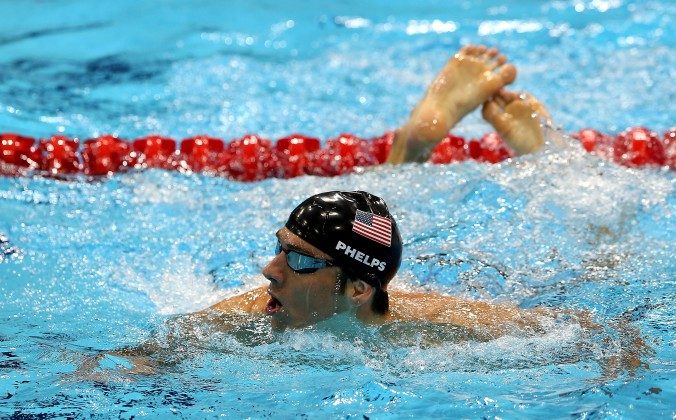 Michael Phelps leaves the pool after competing in the Men's 4x100m Medley Relay Final at the London 2012 Olympic Games. Speculation is increasing about Phelps returning for the Rio 2016 Olympic Games, partly fueled by Phelps himself. (Ronald Martinez/Getty Images)
Sports

It’s looking more and more likely that Michael Phelps will compete at the 2016 Summer Olympics as he has gotten back into shape after taking time away from swimming and plans to swim in a meet “sometime soon,” coach Bob Bowman said.

Phelps stoked reports of a possible return after starting to get back in shape last year, shedding about 15 pounds while working out with his former team at the North Baltimore Aquatic Club.

“If I decide to keep going and swim again, then I’ll compete,” Phelps said in November 2013. ”If I don’t,” he added, letting out a big laugh, “I guess I’ll re-retire. Just don’t compare me to Brett Favre.”

Bowman told the Chicago Tribune this week that Phelps “is definitely in shape,” and has been at the club’s afternoon practice four to five times a week over the past nine months.

The major meet in which Phelps would compete to get on the U.S. 2015 world team is in August in Irvine, California.

“If he swims a meet in the next couple months and does well, he will probably give it a shot in Irvine,” Bowman said.  “But he doesn’t have to do that to have a shot at the 2016 Olympics.”

Bowman added that Phelps will probably focus on shorter events such as the 100 freestyle and 100 butterfly, and relays.

Phelps set an Olympic record for most medals at the 2012 London Olympics with 18 gold medals and 22 overall medals in his career.