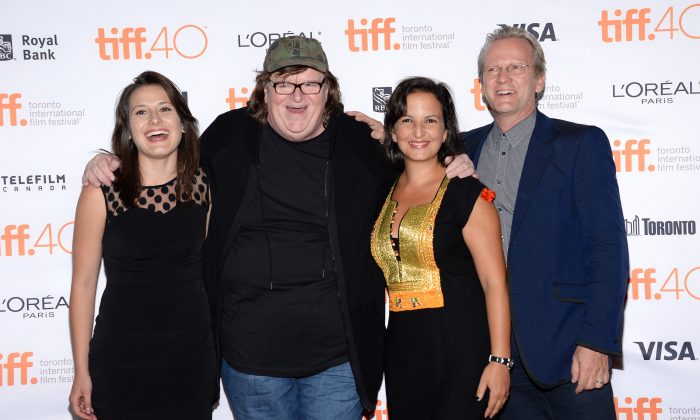 Director Michael Moore, second from left, poses with people in his film, from left Jenny Tumas, Amel Smaoui and Pasi Sahlberg at the "Where to Invade Next" premiere on day 1 of the Toronto International Film Festival at The Princess of Wales Theatre on Thursday, Sept. 10, 2015, in Toronto. (Photo by Evan Agostini/Invision/AP)
Entertainment

Michael Moore: ‘American Exceptionalism Is the Death of Us’

TORONTO—”Mike’s Happy Movie” was the working title of Michael Moore’s latest documentary, “Where to Invade Next,” but few would consider its examination of American ills — from runaway college tuition to mass incarceration — the stuff of bubbly, feel-good delight.

Yet “Where to Invade Next,” in which Moore plunders foreign (mostly European) ideas like Italy’s government-mandated vacation or Portugal’s decriminalized drug use to bring back home to America, has an unmistakable whiff of hope.

Yes, Moore, that passionately voluble critic and left-wing icon, is feeling a wind at his back. Moore’s first film in six years, he says, was partly inspired by change he’s witnessed in recent years, from the Occupy Wall Street movement to the success of marriage equality.

In “Where to Invade Next,” which Moore is currently shopping for distribution, he travels to various countries seeking smarter ways to educate, police, and work. “Instead of sending in the Marines,” he says in the film, “send in me.”

In an interview following the movie’s Toronto International Film Festival premiere, the 61-year-old filmmaker weighed in on Hilary Clinton (“a decent soul with a great sense of humor”), Bernie Sanders (“a bit of a crank”) and where he got his international outlook growing up in northern Michigan (“I blame Canada”).

Your film suggests American chest-thumping has blurred its vision.

Moore: This concept of American exceptionalism is the death of us. We know personally it does none of us any good walking around going “Yeah! Yeah!” That’s not the path to self-improvement. I mean, you can like yourself, and I do. I love the fact that I’m an American. I love this country. I love everything about what it means. But I also embrace the other side of it, and in doing so, it’s incumbent upon me as a citizen to want to help fix it.

Does this film signify some optimistic shift in you?

Moore: I am crazily optimistic about things getting better and people having the power to do that and making it better. But remember, I’m a filmmaker and my first concern is always to make a great movie. If I don’t make a great movie, then the politics are what? Nothing’s going to come of it because no one’s going to be watching my movie.

Do you think the protest spirit of America has waned?

Moore: The month before the Iraq War began—that one Saturday—there were millions of people in the streets in towns all over America. Largest collective demonstration in the history of the United States. One month later, it didn’t stop the war. And when it didn’t, people just kind of gave up and there weren’t large-scale demonstrations after that. People just can’t give up so easily here. Things take time.

What are your thoughts on the presidential race?

Moore: I think it’s going to be very interesting. And I think it’s really too early to tell what’s going to happen. I know people are worried about Donald Trump, but what you have to understand about Trump, first of all, is that he’s a performance artist. … There will come a point here, this year, where people go: OK, we’ve had enough of this performance art.

You’re involved with movie theaters in Michigan. Do you still believe in the theatrical experience?

Moore: This is our one populist art form. It’s the one thing everybody can still sort of do no matter what their economic status is. You can’t go to music anymore. If you’re a working person or if you’re poor, you can’t go to a concert anymore because it costs hundreds of dollars now to get a ticket. You can’t go to an NBA game. You can’t go sit in the bleachers at Yankee Stadium for five bucks. Those days are over.

Do you worry that many conservatives won’t consider seeing your film—that you will merely preach to the choir, so to speak?

Moore: I think why I upset Fox News and the right wing so much is because I’m one of the few people on the left that has crossed over into mainstream America that has a large audience in Middle America. And that drives them crazy because the left is supposed to be out there on the left wing of the limb on the tree. And I don’t live out there, I live here. I reach millions and millions of people, and that’s a threat to them.

Will I reach that 20 percent way over on the right? No. But I’m not trying to reach them. I’m doing what I wish more people in television and movies would do, where everyone—they’re broadcasters—is trying to reach a broad audience, and in doing so, you have to mollify the message. … By the time it’s over, what we have is mostly mediocre movies and mediocre television. And it’s only those TV shows and movies that say, “To hell with that. I’m going to give this to you from the heart, from the gut, and let the chips fall.” Those are the great movies. Those are the great TV shows.