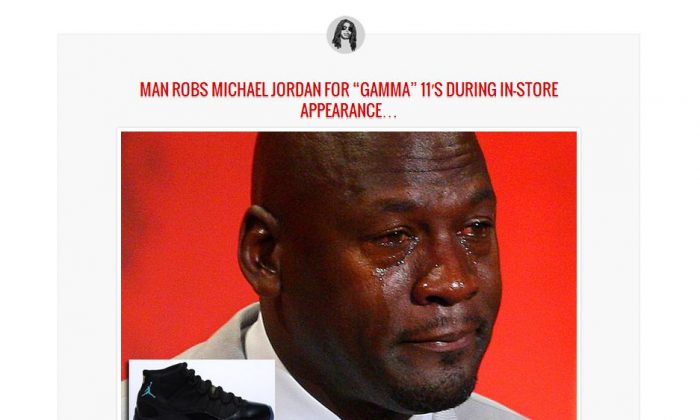 A screenshot of the Cream BMP website shows the hoax article.
Social Media

A fake article that’s gone viral is saying that Michael Jordan, the six-time NBA Champion, was robbed for some Air Jordan Gamma Blue 11s and an autograph in Chicago. It previously said that a man killed three people for the shoes before it was changed.

The website, CreamBMPDaily–a satire news site–posted the Jordan article, which has since got more than 90,000 “likes” on Facebook. “Nba legend Michael Jordan was robbed at gunpoint during an in-store sneaker signing for the Gamma 11′s released earlier today at a Chicago sneaker boutique,” it reads. It then falsely quotes Jordan in saying that anyonecould have robbed him, adding that it even “could have been Chief Keef,” the rapper from Chicago.

On its about page, CreamBMP, which is written by the comedian CREAM, states it’s a satire news site.

Other “satire” reports include one that claims “Jay-Z filed for divorce” from wife Beyonce. Another one claims that singer Chris Brown “punch[ed] Santa in the face at [a] children’s hospital,” while another says that boxer Adrien Broner wrote a “suicide note” following his loss last week.

A number of people believed that Jordan was robbed, re-posting the article on Twitter and Facebook. “Michael Jordan cant even get a pair of jordans without gettin robbed,” wrote one.

Another added: “Chicago is too wild, Michael Jordan got robbed and they stole his personal pair of Gamma 11s…and they forced him to sign them LOL.”

Jordan’s Gamma Blue 11s were released this week, costing around $170. The New York Daily News reported that the release of the shoes sparked fights across the U.S.–from California to the Bronx.

A number of Instagram and Vine users uploaded videos of fights over the shoes.

One uploaded by “SneakerWatch” shows a fight outside a Foot Locker in an unnamed location before police come and break it up. “They macin’,” says one person off-camera, referring to police using pepper spray to disperse the crowd.

Another video taken in Stockton, Calif., shows another brawl over the shoes, according to the Stockton Record. “What people do for Jordans: Straight up brawling in Finish Line for last pair of Gamma Jordan 11’s!” the video title reads.