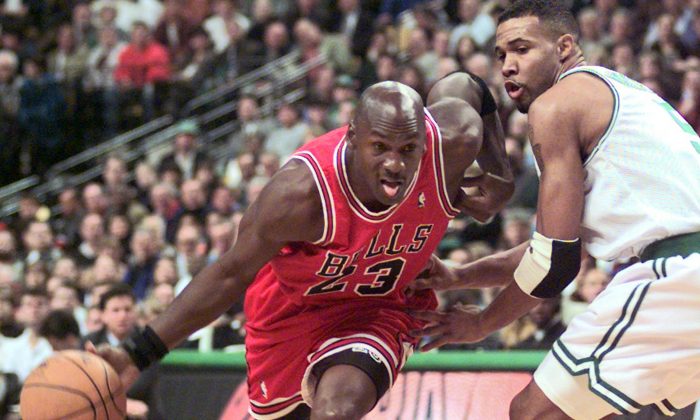 Michael Jordan Once Punched a Seven-Foot Center in Practice

Michael Jordan was a legendary basketball player, but sometimes his drive ramped up to a level that prompted some physical interactions–even with teammates.

Horace Grant, who played with Jordan on the Bulls, recounted recently in a radio interview how Jordan punched seven-foot center Will Purdue in practice one time.

“I hate to tell the story but Will and I are still good friends … Typical Phil (Jackson) we run this play and Will set an illegal pick on MJ, and MJ said,’Will, don’t do that again.’ ‘Whatcha talking about’ that’s Will. MJ says alright; Phil says run it again. So naturally we run it two more times, illegal pick. MJ walks up to Will — boom. Lit him up,” Grant said.

“It was over; we grabbed Will — you’re not going to hurt MJ. MJ can take care of himself. The next day on the plane, Will gets on with this huge shiner.”

Writer Sam Smith recounted this incident in his book The Jordan Rules.

“It was during the 1989-90 season. Perdue was setting a screen, which usually resembled a seven-foot piece of spaghetti, but this time he dug in,” Smith wrote.

” Jordan came by, expecting Perdue to give way as usual, when Bang! Jordan slammed into Perdue and stopped, almost sliding down to the floor like some life-size cartoon character. Jordan stopped, looked hard at Perdue, and swung. One! Two! Right to the side of the head. Perdue’s knees wobbled, but he remained upright. ‘Why the hell don’t you ever set a pick like that in a game?’ Jordan screamed.”

It’s certainly not the only time that Jordan ended up punching a teammate, either.

Steve Kerr has recalled before how he and Jordan came to blows in training camp.

“I took exception to something he said,” Kerr told ESPN last year. “So I was talking back and I don’t think Michael appreciated that … and we got in the lane and he gave me a forearm shiver to the chest and I pushed him back. And next thing you know, our teammates were pulling him off of me.”

Kerr ended up with a black eye, but did manage to get off some punches before it was broken up.

“I knew that if we were in an actual fight he could actually probably kill me if he wanted to,” Kerr says. “It was more just I’m going to stand up for myself.”

Jordan later called Kerr, per Jackson’s instruction, and apologized, and the pair later moved on.

Jordan has also been reported to have punched Jud Buechler before, among other teammates.