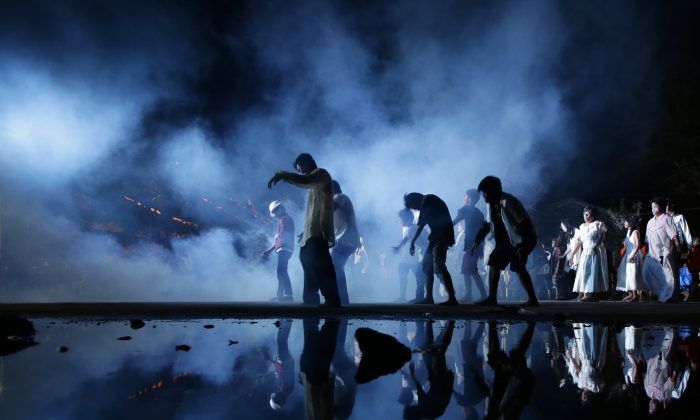 Filipino dancers perform to Michael Jackson's hit song "Thriller" at dawn on Sunday, Oct. 27, 2013, at a park in Obando township, Bulacan province north of Manila, Philippines. The performance was part of simultaneous worldwide dance events to celebrate the album's 30th anniversary and an attempt for a Guinness World Record. (AP Photo/Bullit Marquez)
Entertainment

Michael Jackson’s ‘Thriller’ Video Gets a 3D Release Next Year

The 14-minute 1983 classic short film will be overhauled by original director John Landis after he resolved a dispute with the late star’s estate, and it could even be released in cinemas.

Landis said: “That lawsuit went on for so many years, (but) we settled and they paid me finally. And so, actually there is something happening with ‘Thriller.’

“It is going to reappear in a highly polished and three-dimensional way that is very exciting on the big screen.”

A family insider says the release of the 3D film represents part of a plan Jackson had for his ‘This Is It’ shows – a 50-date London residency which he had been preparing for when he died of acute Propofol intoxication in June 2009.

The source told the New York Daily News newspaper’s Confidenti@l column: “John [Landis] has been secretly working away on this for several months now.

“The iconic video has never been released on Blu-ray or seen in cinemas and 3-D, and that was always a vision Michael had. In fact, his ‘This Is It’ London show was meant to feature a segment which included a 3-D performance.”

And the estate are even looking into turning ‘Thriller’ into a franchise.

The source said: “The estate has been looking at gaming ideas, too, and ‘Thriller’ fits into the genre.

“It could a be a dance experience or a zombie-style,shoot-‘ em-up-style movie. There are so many possibilities with this creative masterpiece.”

Official paperwork from the Jackson estate reveals plans for ventures including “multiple albums,” “Internet games” and “film, documentary and a Broadway play about Michael.”

The body recognises works that are “culturally, historically or aesthetically” significant.