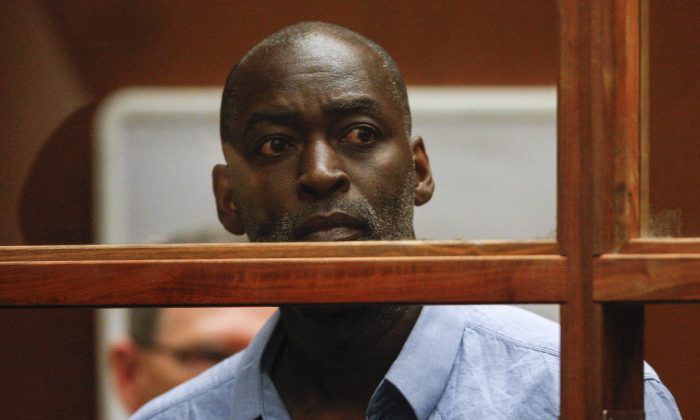 Actor Michael Jace appears in court in Los Angeles Thursday, May. 22, 2014. A judge has delayed the arraignment of Jace on a murder charge filed over his wife's shooting death earlier this week. Attorneys for Jace, who played a police officer in the hit TV series "The Shield," sought a continuance during the actor's first court appearance in Los Angeles on Thursday. He's due back in court June 18. The 51-year-old was charged Thursday with a single count of murder and he is accused of shooting his wife April multiple times in their home Monday evening. (AP Photo/David McNew, Pool)
Entertainment

Michael Jace’s in-laws are launching a fund to help raise money for her sons.

Jace, who is known for his work acting in “The Shield,” was charged with murder in his wife’s death.

Relatives of April organized a GoFundMe.com page to get $20,000 to help with April’s funeral and pay to help care their boys, the NY Daily News reported.

“As most of you know, our family is grieving the sudden and tragic loss of our dear April Jace. April was a vibrant, beautiful woman and an incredibly dedicated mother. We will all miss her contagious laughter, vivacious personality and her radiant smile,” Chris Henry, a relative of April, wrote on the page.

“Every dollar helps and will enable us to honor this incredible woman and care for her children with the excellence she would have wanted,” he wrote.

“At very least they heard the shots,” LAPD Det. Sal LaBarbera told the LA Times of the children. “It is a terrible tragedy, made all the more worse by their children being there.”

Neighbors said they saw Michael Jace pull into the driveway, walk in, and then the neighbors heard popping sounds.

According to the Los Angeles Times, Michael Jace had financial problems before the incident.

But a family friend said that the shooting is unlike the actor.

“They looked like a couple that was in love,” Mark Robles, 42, said on Thursday. “I was shocked (at the news).”

Robles told the Daily News that he trained with Jace and his two boys at his jiu-jitsu academy for a year.

“I had a training session with him a month prior,” Robles added. “He was always very calm in the positions he was put in.”