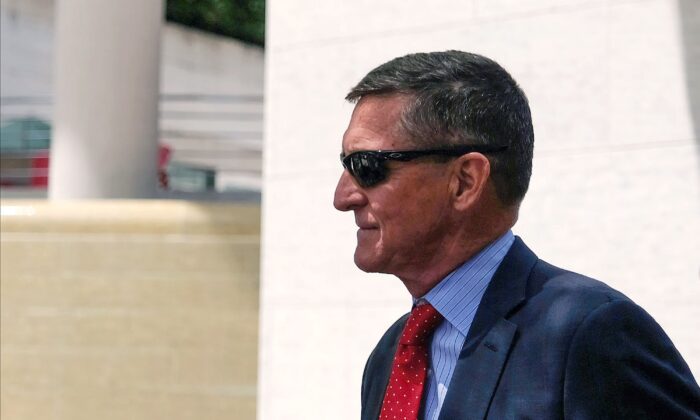 Flynn pleaded guilty to one count of lying to the FBI in late 2017.

Flynn, who served as director of the Defense Intelligence Agency during the Obama administration, alleges that the government acted in “bad faith,” according to the new filing (pdf). His lawyer, Sidney Powell, also claimed that the government was vindictive and breached the plea agreement.

Flynn spent hundreds of hours “trying to cooperate with the government in accordance with Mr. Flynn’s plea agreement, which requires him to provide truthful testimony,” Powell wrote.

“Only after new counsel appeared, did the government for the first time demand an admission and testimony from Mr. Flynn that he knew and intended when he signed the FARA registration form that it contained several material false statements. Not only was that demanded testimony a lie, but also, the prosecutors knew it was false and would induce a breach.”

Powell later said that prosecutors “concocted the alleged ‘false statements’ by their own misrepresentations, deceit, and omissions.'”

“It is beyond ironic and completely outrageous that the prosecutors have persecuted Mr. Flynn, virtually bankrupted him, and put his entire family through unimaginable stress for three years,” she added.

Flynn fired his lawyers in June 2019 and hired Powell, a former federal prosecutor, who has since accused the government of withholding exculpatory information or providing it late. She has also argued that the government had no proper reason to investigate Flynn in the first place.

Flynn has repeatedly seen his sentencing pushed back as he worked with the government before prosecutors later appeared to turn against him, urging a strict sentence.

In late November 2019, District Court Judge Emmet Sullivan canceled the sentencing hearing at the request of both parties. The next month, Sullivan denied Flynn’s requests that the government give him the information he deems exculpatory and to dismiss the case against him.

“The sworn statements of Mr. Flynn and his former counsel belie his new claims of innocence and his new assertions that he was pressured into pleading guilty,” Sullivan wrote in his Dec. 16 opinion.

Earlier this month, the Department of Justice recommended that Sullivan sentence Flynn to up to six months in prison.

The prosecutors opted for a harsher recommendation than one they proposed in December 2018, alleging that Flynn, a former national security adviser, has since failed to accept responsibility and at times sought to impede the government’s efforts in other cases, specifically the prosecution of his former business partner, Bijan Rafiekian.

Petr Svab and Ivan Pentchoukov contributed to this report.