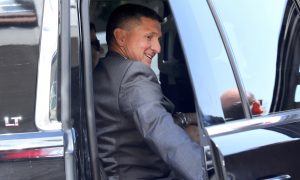 Michael Flynn: ‘The American People Have Been Buddy Breathing With Me for 4 Years’

Retired Army Lt. Gen. Michael Flynn, the former director of national intelligence, said he feels indebted to the American people who have stood by him and his family amid the years-long political saga that ended with a pardon from President Donald Trump.

“The American people have been buddy breathing with me for four years,” Flynn told The Epoch Times’ American Thought Leaders. “Another way to describe it was the deep state buried me six feet under the ground, wanted me to die. Somehow, somebody stuck a straw up through that, or a straw was allowed to be stuck up to the air.”

The former national security adviser to the president said he now feels he has the responsibility to fellow Americans to protect the country from going “to the way of the wolf” by using the platform that has now been afforded to him.

“I just feel like I have a responsibility to them. And I’m not gonna let them down,” he said.

Flynn was the subject of an FBI investigation in 2016 while the agency was broadly probing into alleged connections between the Trump 2016 presidential campaign and Russia. The FBI had little reason to suspect the campaign and Flynn, and documents later released by the Justice Department (DOJ) revealed that agents believed that Flynn’s case should be closed.

The case received national attention earlier this year after the DOJ released documents, including handwritten notes that revealed top officials in the department had questioned whether the goal of questioning Flynn during an interview at the White House in 2017 was to “get him to lie so we can prosecute him, or get him fired?”

Flynn eventually pleaded guilty to lying to the FBI in December 2017 about his calls with then-Russian ambassador to the United States Sergey Kislyak, which was the subject of the FBI investigation. He later withdrew his plea prior to sentencing.

The DOJ later determined that the calls between Flynn and Kislyak were legitimate and that the FBI had no legitimate purpose questioning him about them, other than to try and catch him in a lie, which isn’t a proper investigative purpose. The department then sought to dismiss the case against Flynn.

Among the things Flynn wants to protect is the freedom of speech and the ability to present a view different from mainstream thinking without repercussions.

“A dissenting view in a free system, in a democracy, in our constitutional republic should be cherished,” the retired three-star general said.

“You don’t have to agree with it, and you can get a whole bunch of other views, right, you’re going to get views that you know, from other, maybe 180 degrees, but it should be cherished,” he added.

“So you know … this report comes out. So then you read it, you read the same report, and because you see that report, and next thing you know, everybody’s reporting on the same thing. It’s a complete waste of resources and a waste of time,” he said.

The retired general also said it is important to protect the moral fabric of American society, which he believes has been usurped and attacked through education, the breakdown of family values, and the expansion of our government institutions.

In reflecting on the ordeal that he faced, Flynn said that he and his family have turned the support they received into a “big positive.”

“To finish, as I described about, my life has been buddy breathing for the last four years. So now I’m back to the surface. Okay. And I’m a good swimmer. So I think that I’ll be okay,” he said.