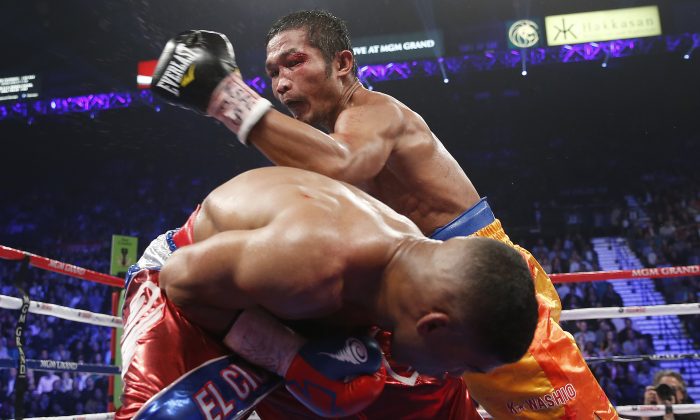 The 29-year-old Farenas (37-4-4, 29 KOs) of Sorsogon, Philippines and 39-year-old Velazquez (56-20-3, 38 knockouts) of Tijuana, Mexico will battle in a ten-round event. Alem Robles will take on unbeaten Dave Penalosa in the undercard.

The fights were put together by MAG Pacman Promotions, which is run in part by Manny Pacquiao.

Promoter Gerry Penalosa, who is also involved, feels confident that Farenas, whose career he’s guided over the past several years, will beat Velazquez. He told Rappler that it’s a matter of “if” not “when” Farenas wins.

“I think [Farenas] is concentrating for tomorrow’s fight,” said Penalosa. “I hope he gives a good fight so we can move forward. We wanted to test Farenas, Velazquez is an experienced fighter. He’s good.”

If Farenas wins he may be matched up with Mikey Garcia (34-0, 28 knockouts), the WBO junior lightweight titleholder.

“If they’re not scared, if the fight isn’t too hard for them, they should take it,” said Penalosa.

Velazquez is also confident of a win, with lots of experience after 79 fights over his career. He’s faced Manny Pacquiao (2005) and Bobby Pacquiao (2006) before. He won the first round against Manny before eventually losing at the end of the sixth round while beating Bobby in 11 rounds on disqualification.

“Manny was just too fast,” Velazquez said through a translator to GMA. “I was expecting him to have power because he knocked out Marco Antonio Barrera and knocked down Juan Manuel Marquez thrice but I did not expect him to be that fast.

“Bobby was also strong but he was nowhere as fast as Manny. It was a tough fight but he kept hitting me low.”

For some reason, it doesn’t appear that the fight is available for live streaming. It will be broadcast on GMA 7 on March 22 immediately after East Bulaga.