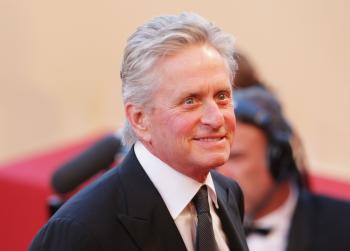 Actor Michael Douglas is being honored by the Film Society of Lincoln Center with the annual Chaplin Award. (Dave Hogan/Getty Images )
Entertainment

Michael Douglas' spokesperson told People magazine that he will undergo eight weeks of chemotherapy after doctors found a tumor in his throat.

The 65-year-old Oscar Award-winning actor, son of acting legend Kirk Douglas, released a statement which said, “I am very optimistic.”

Doctors agreed with his optimism and expect he will make a full recovery, People magazine reported.

Douglas starred in other notable roles including “Fatal Attraction" (1988), "War of the Roses" (1990), and "Basic Instinct" (1992). He won an Oscar award for his portrayal of Wall Street shark Gordon Gecko in “Wall Street.” He won his first Academy Award in 1975 for producing “One Flew Over the Cuckoo's Nest.”

In 2000, Douglas married Welsh actress Catherine Zeta-Jones, and they have been together since.