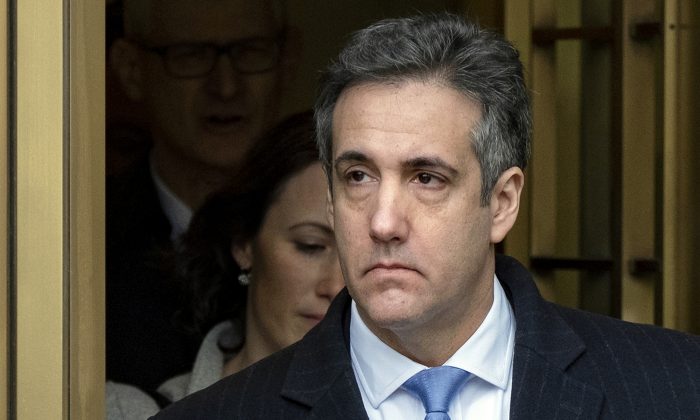 Federal prosecutors have told a judge in New York they have concluded their investigation into campaign finance crimes committed by convicted felon Michael Cohen who was also President Donald Trump’s former personal attorney.

U.S. District Judge William Pauley confirmed the end of the investigation and ordered the remaining documents related to Cohen’s three-year prison term to be unsealed on Thursday, July 18, at 11 a.m., declaring the issue of “national importance.”

The documents were those used by federal prosecutors to obtain a search warrant for Cohen’s home and office last year as a result of the Russia investigation by special counsel Robert Mueller.

Pauley had ordered some search warrant materials released March 19, but he kept the documents on the campaign finance charges under seal because they were related to the investigation that was still active at the time.

Pauley said that because all investigations into Cohen are now over, the documents can be released to the public.

“The campaign finance violations discussed in the materials are a matter of national importance,” the judge said in his ruling. “Now that the government’s investigation into those violations has concluded, it is time that every American has an opportunity to scrutinize the materials.”

In response to Pauley’s order for unsealing the documents, Jay Sekulow, a lawyer for Trump, said in a statement: “We are pleased that the investigation surrounding these ridiculous campaign finance allegations is now closed.

“We have maintained from the outset that the president never engaged in any campaign finance violation.”

Referring to court documents, legal experts said at the time of Cohen’s December 2018 sentencing that campaign-finance violations had factored minimally towards Cohen’s three-year prison term. He began serving the sentence on May 6.

Rather, crimes of tax evasion, making false statements to a bank, and lying to Congress accounted for most of the sentence.

The crimes are not related to allegations of collusion with Russia, the core theme of Mueller’s probe.

Cohen on Aug. 21, 2018, admitted to willfully evading taxes by failing to report more than $4 million in income between 2012 and 2016. He also admitted to lying to a bank about his net worth and monthly expenses in order to obtain a loan, concealing a $20 million debt to another bank.

Cohen had also accepted a plea deal (pdf) from the Southern District of New York (SDNY) prosecutor’s office on Aug. 21, 2018, which let him avoid the maximum sentence he was facing of 65 years in prison.

Prosecutors Overreach in Their Case Against Michael Cohen

As part of the plea deal, Cohen had also pleaded guilty to campaign-finance charges, which involved non-disclosure-agreement payments Cohen arranged for women claiming to have had affairs with Trump more than a decade ago—$130,000 to adult film star Stormy Daniels and $150,000 to Playboy model Karen McDougal. Trump denied having the affairs.

Later on Nov. 29 in a separate guilty plea, Cohen admitted to lying to Congress as part of a plea deal with then-special counsel Robert Mueller. Cohen said during the hearing that he submitted a false written statement to Congress in 2017 about a Trump Organization real estate project in Moscow. Cohen and his attorney signed the plea agreement (pdf) which recommended a sentence of up to six months and a fine of up to $9,500.

Lynne Patton, a longtime associate of Trump who now works under his administration as the regional head for New York and New Jersey for the Department of Housing and Urban Development (HUD), who had known Cohen for more than 10 years, previously told The Epoch Times: “Cohen is not in jail for anything the president of the United States or the campaign did. He is in jail because he obtained a personal loan by falsifying the value of his taxi medallions. He is in jail because he misappropriated funds to pay off Stormy Daniels from a home loan, which is considered bank fraud. And he is in jail because he didn’t pay his taxes personally.”

Ivan Pentchoukov, Melanie Sun, Reuters and The Associated Press contributed to this report.