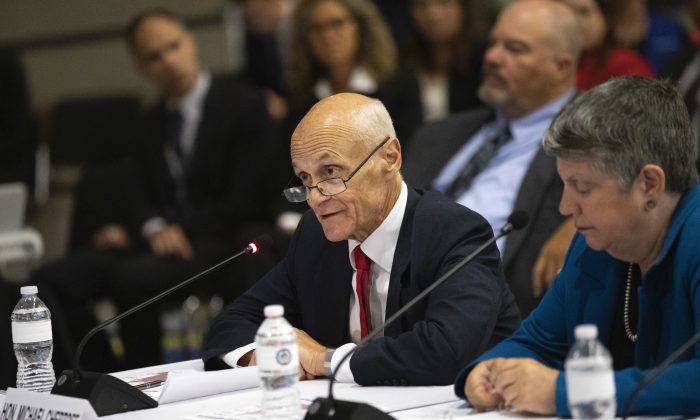 The Department of Homeland Security’s (DHS) announcement that its newly formed Disinformation Governance Board would be reviewed by two individuals has raised eyebrows, as one member has a history of pushing misinformation himself.

To help instill “trust in our work,” the DHS has asked former U.S. Deputy Attorney General Jamie Gorelick and former DHS Secretary Michael Chertoff to lead a “thorough review and assessment” of the disinformation board, the DHS said in a statement posted to its Twitter account on May 18.

But Chertoff himself has been found spreading false information, such as his dismissal of the Hunter Biden laptop scandal, according to a report from The Washington Free Beacon.

The scandal involved emails retrieved from a laptop that Hunter Biden left with a computer repair shop in 2019 and never picked up. The authenticity of the laptop and the emails have been confirmed. The shop owner, John Paul Mac Isaac, transferred the documents to Rudy Giuliani, a lawyer for President Donald Trump at the time.

The New York Post then published a story about the laptop and the retrieved emails three weeks prior to the 2020 presidential election. The story suggested the involvement of President Joe Biden, his son Hunter Biden, and his brother, James Biden, in several overseas business ventures involving China, Russia, and Ukraine while Joe Biden was vice president.

In a virtual interview at the Alliance of Democracies in November 2020, Chertoff had this to say about the laptop issue: “It looks like the evidence that’s emerging shows that these purported documents were circulating by the Russians in Ukraine for some period of time. This suggests that this information is not only online but it’s an old-fashioned spy story involving human intelligence sources.”

In the May 18 announcement by the DHS, the agency stated that Chertoff and Gorelick will conduct the review through the bipartisan Homeland Security Advisory Council (HSAC). The assessment will focus on answering two questions.

“First, how can the Department most effectively and appropriately address disinformation that poses a threat to our country, while protecting free speech, civil rights, civil liberties, and privacy,” according to the statement.

“Second, how can DHS achieve greater transparency across our disinformation-related work and increase trust with the public and other key stakeholders.”

The HSAC has to submit the final recommendation within 75 days. During the review, the disinformation board will not convene and its work will be paused.

The DHS claimed that the board’s intended purpose has been “grossly and intentionally mischaracterized.” The board does not aim to police speech and is only aimed at protecting constitutional rights, DHS Secretary Alejandro Mayorkas said.

Nina Jankowicz, who was tapped to lead the disinformation board, submitted her resignation soon after her appointment. Like Chertoff, Jankowicz has also dismissed the Hunter Biden laptop story as a Russian disinformation operation.

She also made posts touting the discredited “Steele dossier,” which was used to make false allegations against former President Donald Trump during the 2016 presidential campaign. The dossier was later discredited, while the laptop and messages about Biden’s overseas business deals were authenticated.

Florida’s Republican Gov. Ron DeSantis warned during a recent press conference that the government would use the disinformation board to determine “what is acceptable,” and would expect social media networks to do their “dirty work.”

By claiming social media outlets are “private companies,” Washington will use them to “stifle dissent,” he predicted.