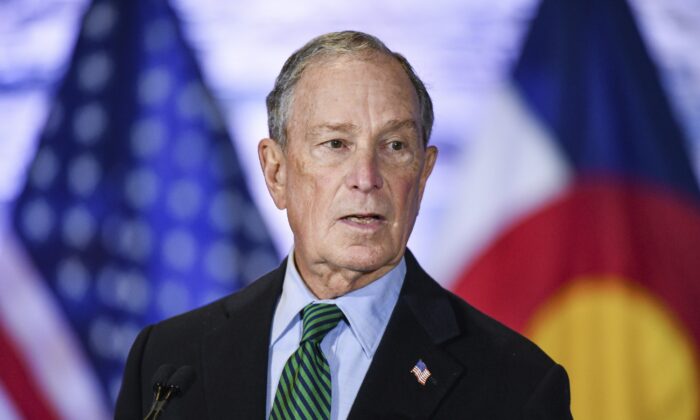 Billionaire media mogul and Democratic presidential contender Michael Bloomberg is donating $10 million to House Democrats who are being maligned for supporting the impeachment of Republican President Donald Trump.

“Sadly Republicans are more interested in protecting the president than the Constitution,” Bloomberg said in a statement. “Fortunately House Democrats are holding the President accountable, and they need resources to stay in office.”

The donation is planned for Thursday.

Bloomberg, 77, announced he was running for the Democratic presidential nomination on Nov. 24. He said he has the best chance to beat Trump and claimed the president is “an existential threat to our country and our values.”

In a statement, House Speaker Nancy Pelosi (D-Calif.) praised Bloomberg for the donation.

“In 2018, Mayor Bloomberg was a critical ally in helping House Democrats regain the Majority. Now, the stakes are even higher as we work to make health care more affordable by reducing the skyrocketing cost of prescription drugs, increase wages and root out corruption,” she said.

“We welcome and thank Mayor Bloomberg for his support.”

Pelosi and party leaders announced on Tuesday two articles of impeachment against Trump and are expected to call a vote on them soon. Democrats in battleground districts have largely resisted committing to voting for impeachment, saying they had to see all the evidence supporting the articles first.

Republicans have attacked moderate Democrats who have signaled support for the impeachment inquiry against Trump—all but two voted for the impeachment process resolution—and are especially targeting those who hold seats in districts that Trump won in 2016.

Polls have shown that most Republicans and Independents oppose impeachment, while most Democrats support it. Some moderate Democrats are reportedly pushing for censure of Trump, not impeachment.

Republican strategists say the widespread Democratic support for impeachment could lead to the GOP flipping the House majority in 2020, though Democrats say that won’t happen.

The donations to House Democrats will be handled by the House Majority PAC, an outside group that manages House races.

“With this extraordinary commitment from Mayor Bloomberg, we’ll be able to generate more resources to ensure voters understand how their Democratic House majority is working on the issues that matter, like protecting access to affordable health care and reducing the cost of prescription drugs,” Robby Mook, a former presidential campaign manager for Hillary Clinton who now runs the PAC, said about Bloomberg’s donation.

Apart from the donation, Bloomberg has dropped tens of millions of dollars on his 2020 bid in the weeks following his entry into the race, including nearly $60 million on television ads.