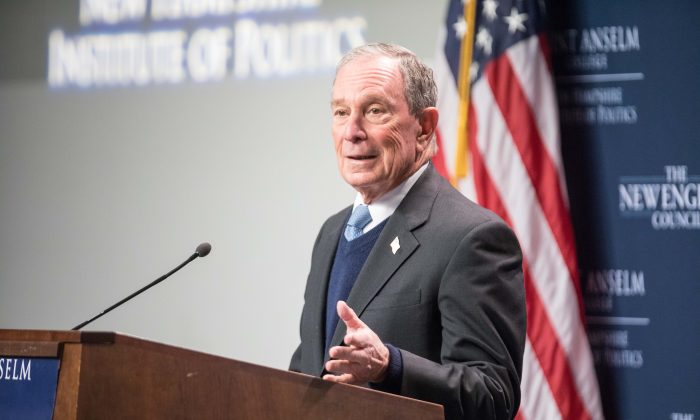 Michael Bloomberg Announces Run for President: ‘We Must Win This Election’

After weeks of speculation and testing, Michael Bloomberg, the former mayor of New York City, announced his run for president in 2020 as a Democrat.

The billionaire owner of Bloomberg News announced his candidacy in a written statement on Nov. 24.

“I’m running for president to defeat Donald Trump and rebuild America …  We must win this election. And we must begin rebuilding America. I believe my unique set of experiences in business, government, and philanthropy will enable me to win and lead,” he said in a statement.

“As a child and a Boy Scout, I was taught to believe in the promise and potential of America, and I have never been more worried about its future than I am today. America is at its best when we work together to find meaningful and lasting solutions to the big challenges that we face. We need a president who understands that truth—and who can do it, rather than just make promises.”

Polls have shown that he has a steep uphill battle. A poll from Morning Consult showed that just 4 percent of 2,225 registered Democratic voters would pick him as their first choice to take on Trump in 2020.

I believe my unique set of experiences in business, government, and philanthropy will enable me to win and lead.

Meanwhile, among Democrats, Bloomberg’s billions might be his biggest obstacle. Several candidates, including Sens. Elizabeth Warren (D-Mass.) and Bernie Sanders (I-Vt.), have criticized his wealth.

Earlier in November, he filed a statement of candidacy with the Federal Election Commission and also filed to appear on some Democratic primary ballots with early deadlines. His aides had said those moves were formalities as he considered making a run for office.

One of his first TV ads ran Nov. 24, according to the Washington Examiner. It touts a promise “to rebuild the country and restore faith in the dream that defines us: Where the wealthy will pay more in taxes and the middle class get their fair share; everyone without health insurance can get it, and everyone who likes theirs, keep it; where jobs won’t just help you get by but get ahead.”

“And on all those things, Mike Bloomberg intends to make good,” the ad says.

Several weeks ago, amid reports that he might run, Trump offered a hint at what he’d be calling Bloomberg.

“Little Michael will fail. He’ll spend a lot of money” in the election, but he will ultimately not win the presidency, Trump told reporters. “He’s got some personal problems,” the president also said, without elaborating. He also clarified a previous comment, saying he knows Bloomberg “fairly well” but not exceptionally well.

Trump has dissed Bloomberg as “Little Michael” before. Trump, who is 6 feet, 3 inches tall, is about seven inches taller than Bloomberg, who reportedly stands 5 foot 8.

Counselor to the President Kellyanne Conway on Nov. 24 told CBS that Bloomberg’s entry into the race shows that “the Democratic field is underwhelming.”

“It’s Michael Bloomberg coming in, saying, ‘I don’t think any of you can beat Donald Trump,'” Conway said, referring to the other Democratic candidates.