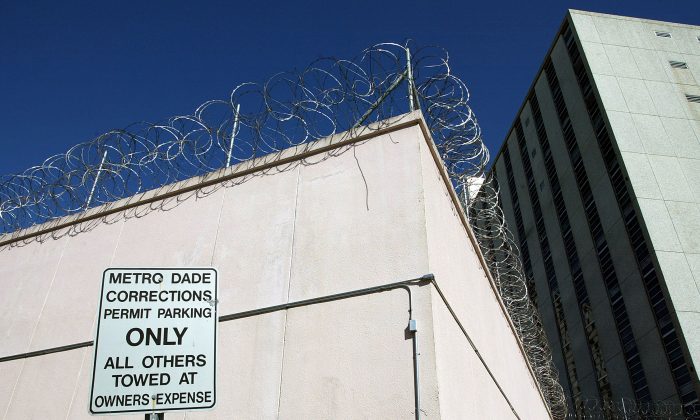 Police: Miami Man Bites One Cop, Beats Another, at Hearing for Battery on an Officer

A Miami-Dade Police officer lost a chunk of his left forearm while attempting to subdue an unruly defendant in court for a warrant hearing on Monday, Nov. 20, police told News 10.

Godel Leveille, 29, had a hearing at Richard E. Gerstein Justice Building in downtown Miami, Florida, for a charge of battery on an officer stemming from an incident in May 2016, the Miami Herald reports.

The judge had ordered Leveille taken into custody. Leveille refused to comply, saying “This isn’t justice” as he punched a Miami-Dade police officer, identified only as Officer Perez.

Half-a-dozen corrections officers swarmed the 275-pound Leveille and eventually managed to cuff him and put a mesh bag over his head to prevent him from spitting—but not before he bit a big chunk of flesh out of the left forearm of Officer Anthony Pando.

“It was a horrendous bite,” Miami-Dade Police Chief Juan Perez told WPLG, the local ABC affiliate. “Nobody deserves to be hurt in the manner that this officer was hurt.”

Police and corrections officials managed to wrestle Leveille out of the courtroom and into a vehicle for transport to Miami-Dade’s Turner Guilford Knight Correctional Center.

Officers Pando and Perez were taken to Miami’s Jackson Memorial Hospital for treatment, Pando for his large bite would, Perez for a serious knee injury.

“I was standing here in the hallway, and I heard commotion, and I heard officers call, and when I came over here to look, there was a man that had bit an officer. He took out a chunk of meat out his right or left hand, and he was bleeding,” Perdomo told WSVN.

“And then they called in, they grabbed the dude, and they tied him down, and they put a bag over his face, and they escorted him out of the courtroom,” he said.

“Yeah, he was mad, bro. I could tell you that one,” said Perdomo about the injured officer.

Leveille was summoned twice to court on Tuesday, Nov. 21, and refused to cooperate both times.

Informed of his refusal, Judge Mindy Glazer asked rhetorically, “OK, you know what, why not shackle him and bring him over?”