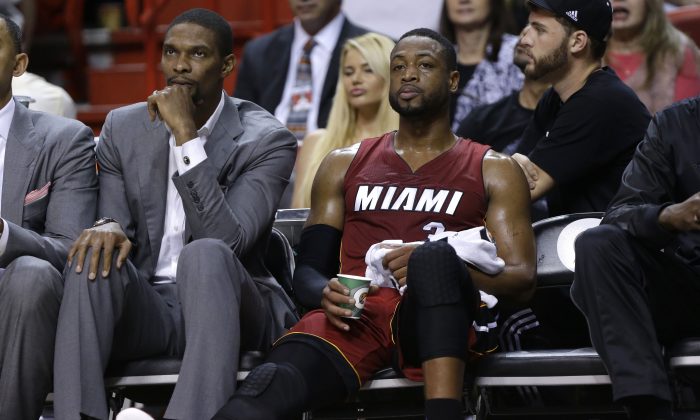 Miami Heat center Chris Bosh, left, watches from the bench with guard Dwyane Wade, right, in the first half of an NBA basketball game against the Chicago Bulls, Sunday, Dec. 14, 2014, in Miami. Bosh did not play due to a calf strain. (AP Photo/Lynne Sladky)
NBA

The Miami Heat suffered a tough loss over the weekend and are preparing for their next game as the news and rumors ramp up.

Star Chris Bosh sat out of the Heat loss to the Bulls on Sunday, but said he should be back soon.

He was bothered by a slight strain in his left calf. No MRI is planned, but he did plan to meet with a team doctor on Monday to have the injury reevaluated.

“It’s a day-by-day thing so far,” Bosh said. “I had some soreness there that really didn’t let up, and it progressed over a day or so.”

“It’s one of those things that can get worse, if you don’t take care of it. It can be a lot worse than it has to be. So we have to take this precaution right now,” he added to ESPN.

On ther other hand, the Miami Herald says Bosh could be out for several weeks, after Bosh said that if he plays too soon “the muscle could tear away from the bone.”

“Bosh is doubtful for [Tuesday’s], but he could be out a few weeks,” the Herald said, without citing where that diagnosis came from.

It was the first game Bosh missed this season.

Coach Erik Spoelstra agreed that the injury needs to be handled carefully.

“With these types of things, you have to be very judicious how you approach it,” Spoelstra said. “He was very sore [Sunday] and [Saturday]. But he doesn’t remember exactly when it happened.”

McRoberts Could be Out for Season

Just when Josh McRoberts appeared to be getting comfortable with his new teammates, and them with him, he got injured again and missed his third game in a row on Sunday because of a right knee bruise.

And the Heat announced on Monday that McRoberts need surgery, and could miss the rest of the season.

Even before that news, a reader wondered when the team will trade him, saying “he must not want to play here.”

“He does. And no one feels worse for the missed time that he does. He has been almost apologetic about each injury or ailment that has kept him out,” responded Ira Winderman of the Sun Sentinel.

“The one thing about the Heat is that they’re willing to be incredibly patient if they believe there is going to be a payoff. It is the approach they took with Mike Miller. And it is one they took with Greg Oden and Eddy Curry. They really like what McRoberts offers and believe his unique game will make them more complex for the opposition to scout in the playoffs.

“When you sign a player coming off toe surgery, you know the payoff won’t be instant. It is why I think they would be reluctant to listen to overtures from Charlotte about a reunion, possibly with Lance Stephenson as the bait. The reality is that the Heat have been a better team with McRoberts on the floor and that 58 games still remain. For now, that means having to endure nights like Sunday.”

Some good news did come Sunday. Chris Andersen played 18 minutes after missing the previous nine games with a sprained right ankle, scoring two points, grabbing three rebounds, and getting one block. Danny Granger also logged 20 minutes, although he picked up five fouls and only shot 1-of-6.