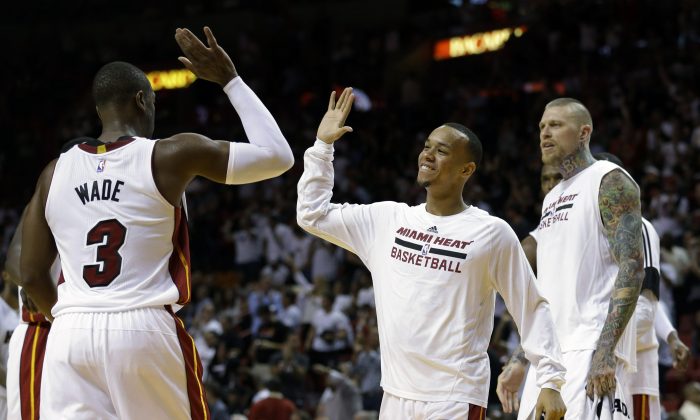 Miami Heat guard Dwyane Wade (3) celebrates with guard Shabazz Napier, center, and forward Chris Andersen after Wade hit a three-point-shot in the final minutes of the second half of an NBA basketball game against the Washington Wizards, Wednesday, Oct. 29, 2014 in Miami. The Heat defeated the Wizards 107-95. (AP Photo/Wilfredo Lee)
NBA

The Miami Heat are 3-0 and the news and rumors have been ramping up.

The Cavaliers, Bulls, Raptors, and Wizards were the teams most predictions had undefeated after the first couple games but all of those teams have suffered a loss.

The latter two were beat by the Heat for two of their three wins.

Chris Bosh and Dwyane Wade have been leading the Heat, with help from newcomer Luol Deng and the retooled backcourt of Norris Cole, Shabazz Napier, and Mario Chalmers.

“This is all going to help us later,” Wade said about the situation, including surprisingly little execution down the stretch against the Raptors.

The Heat did outrebound the Raptors 43-28.

“I guess it’s just effort,” Bosh said. “We know a lot of people aren’t expecting us to do much on the boards.”

Miami plays the Houston Rockets at home on Tuesday. The Rockets are also undefeated.

Bosh Back to Starring Role

Some people felt that the Heat gave Bosh too big of a contract but so far he’s shown that he’s worth it.

Bosh finished with 21 points, 11 rebounds, and four assists against the Raptors, for instance.

“It’s just time,” Bosh told reporters after the game. “I knew I couldn’t settle into that same position I’ve been in the past four years, floating outside and shooting a couple of jumpers. I know I had to switch it up a little.”

Bosh is averaging 25.7 points, 11.3 rebounds and 4.0 assists per game while shooting 54.5 percent from 3-point range over the three games.

DeMar DeRozan, the Raptors guard, was a rookie in Toronto during Bosh’s final season there.

“He was scoring 40 and doing all types of amazing things back then,” DeRozan said of Bosh, who averaged career-highs of 24 points and 10.8 rebounds for the Raptors the season before he opted out of his contract to test free agency in 2010.

“It’s a tough question, but I think [Bosh is a better player now]. He’s still the same type of [dynamic] player, but he’s a lot better now than he was, a lot more mature.”

“His pie chart is off the chain with how he can score the ball, where he’s getting the ball, how we’re looking for him,” added Dwyane Wade said. “He’s going to be able to put up those numbers. He’s rebounding great. He looks good. Credit to him for getting himself ready.”

Bosh said that the team is proud of the 3-0 start and seeks more wins.

“Absolutely, we humbly take it. We’ve been saying we want to get off to a good start. It’s about to get tougher. But it’s important for us to get going, hit the ground running,” he said.

Josh McRoberts had an interesting moment during the Raptors game.

The power forward, signed from the Charlotte Hornets during the offseason, struggled to grab a rebound.

Then he ripped off his jersey.

McRoberts, who has only played 19 minutes through two games after missing the first, had to go out of the game and get a new jersey.

Coach Erik Spoelstra indicated before the game that McRoberts is still recovering from toe surgery and would be limited to “spot minutes.”

Danny Granger, Chris Andersen, and Udonis Haslem are also struggling with injuries for the Heat.

Ennis and Napier to Blossom?

A reader recently asked Sun Sentinel writer Ira Winderman about the two rookies on the Heat, Napier and James Ennis– “shouldn’t we be talking about the kids more?”

“Seeing Shabazz Napier and James Ennis pan out certainly would be encouraging. But this remains way too small a sample size,” Winderman said.

“What follows next is what matters, when opponents begin to game plan for them, attack their weaknesses. That’s when you can start to get a read of where this is headed. What is encouraging now is the faith being shown by Erik Spoelstra, although I think with Ennis there could be an adjustment once Danny Granger is healthy enough for regular rotation minutes.

“As for Napier, he appears to already have rotation trust from Spoelstra, and deservedly so. He, by far, is the most polished of the Heat’s young players.”