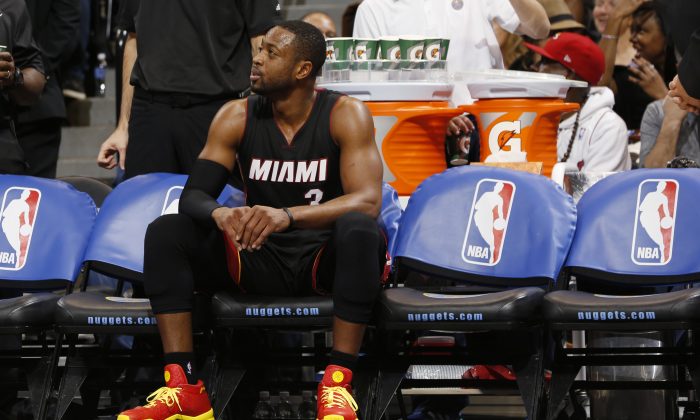 Miami Heat guard Dwyane Wade sits on the bench during a timeout against the Denver Nuggets in the third quarter of the Nuggets' 102-82 victory in an NBA basketball game in Denver on Wednesday, Dec. 10, 2014. (AP Photo/David Zalubowski)
NBA

The Miami Heat split their back-to-back and are now preparing for upcoming games as the news and rumors ramp up.

Dwyane Wade has been consistently scoring in double digits but nearly had that streak snapped at 12 Wednesday. Wade was held to eight points until late in the fourth quarter.

His running bank shot midway through the final period gave him 10 points and he left the game seconds later. “They switched a lot of stuff,” Wade said. “There was no space on the floor. We just really didn’t get any good looks.”

Wade added: “We needed to scrap our playbook at that point and come up with something different.”

Chris Bosh said that it was actually the players not doing well, reported the Sun Sentinel.

“We just shot ourselves in the foot, over and over. We didn’t get any easy ones. We had some turnovers, and that led to them getting easy buckets. We had a bunch of breakdowns on defense, and that did not help us, either,” he said.

“We didn’t have any easy buckets or good looks. Once that happened, they played off the miss all night. We kind of just folded in that second half. I think we played a decent game in the first two quarters, but after that, the ship just sunk very quickly.”

Wade also noted that it was tough playing the tail end of the back-to-back in Denver’s high altitude.

“This is the worst back-to-back in the league,” Wade said. “You come in to see what you can do. You try to come out and compete. We did that for a half and then it got away from us in the third quarter. It was one of those games.”

Heat in the Market for Lopez?

A recent report revealed that the Brooklyn Nets have put multiple players on the trading block, including center Brook Lopez.

A reader asked the Sun Sentinel‘s Ira Winderman whether the Heat would make a play for the big man.

“Two thoughts. First, for anyone who has questioned Chris Bosh because of his perimeter-based playing style, consider that Brook is considered among the softer big men in the league, despite his size and bulk (and that’s not even getting into the injury-prone concerns),” he said.

“Beyond that, and this is more to the point of all of the trade questions that have come this way: What exactly do the Heat have to offer? Most teams looking to deal veterans, perhaps even the Celtics with Rajon Rondo, are looking for top-tier young talent, lottery-range draft picks or expiring contracts. The Heat have none of any of that to offer. As it is, the Heat’s first-round pick in June is headed to the 76ers (through the Cavaliers) unless it is among the first 10 in the lottery (and a trade partner won’t know that until much later in the process).

“And it’s not as if Norris Cole, Mario Chalmers or even Shabazz Napier are going to match up favorably against what so many other teams can offer. The reality is that Pat Riley did his work in the offseason and now needs to see how that plays out. About the only permutation that could make sense would involve Luol Deng for Lopez. I doubt the Heat would do that, and where would that leave the Heat at small forward, anyway? As it is, Deng just about the only thing the Heat have when it comes to a perimeter defender, with his work critical Tuesday against Goran Dragic.”

Josh McRoberts struggled early in the season with injuries and then recovery, but is starting to make an impact for his new team.

“McRoberts isn’t here to be normal, either. It’s taken some time, and will continue to take time, for him to get acclimated to everyone and for everyone to get acclimated to him. He isn’t a pick-and-pop, catch-and-shoot big you can just plug-and-play into just about any system. His skills require custom treatment, which means everyone around him has to learn something new,” it said.

“What was new Tuesday evening, what we’re slowly seeing sprinkled in more and more as the comfort level rises, is McRoberts getting more and more of an opportunity to be a playmaker. Not just as a passer out of the high-post, but as something more like a true point-forward.”

McRoberts had a number of nice passes that enabled players to finish close to the rim, and he also brought the ball up the floor once and handled the ball a lot overall.

The blog also noted the team is outscoring teams by more points with McRoberts on the floor than with any other player, and they’re also playing their best defense, by a significant margin, with him out there. At the same time, McRoberts had to miss the loss to the Denver Nuggets after he suffered a bruise on his right knee against the Suns.