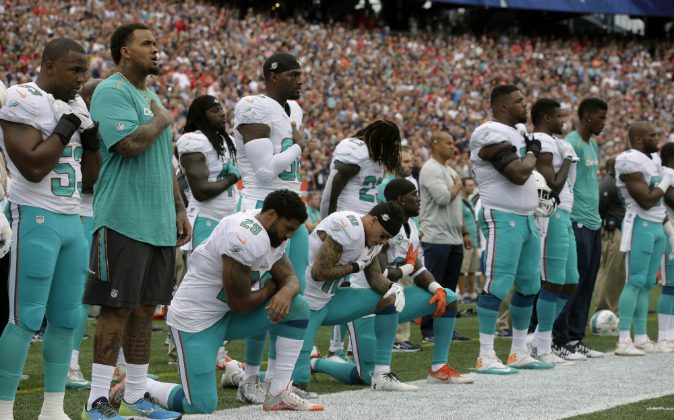 Miami Dolphins players continue to kneel in solidarity with 49ers quarterback Colin Kaepernick in their quest for “equality for all.”

Running back Arian Foster and two of his teammates—wide receiver Kenny Stills and safety Michael Thomas—again took a knee during the playing of the national anthem at Gillette Stadium in Foxborough, Massachusetts on Sept. 18 before their matchup against the New England Patriots.

Linebacker Jelani Jenkins, who knelt last week, stood for the anthem this week along with the rest of the Dolphins roster.

During last week’s matchup against the Seattle Seahawks on Sept. 11, the four teammates knelt during playing of the “Star Spangled Banner.” They were criticized by social media users for continuing the protest on the 15-year anniversary of the Sept. 11, 2001, terrorist attacks. The Broward Sheriff’s Office Deputies Association threatened to not provide members for security for the team’s home games.

“I can not fathom why the Miami Dolphin organization and the NFL would allow the blatant disrespect of the American Flag and what it stands for during the national anthem,” said Jeff Bell, president of Broward Sheriff’s Office Deputies Association Local I.U.P.A 6020, according to the Sun-Sentinel.

Foster told reporters after the game he had no regrets over the timing and was exercising his right to do so.

“They say it’s not the time to do this. When is the time? It’s never the time in somebody else’s eye, because they’ll always feel like it’s good enough,” Foster said. “And some people don’t. That’s the beautiful thing about this country. If somebody feels it’s not good enough, they have that right. That’s all we’re doing, exercising that right.”

Foster left the Dolphins’ 24-31 loss to the Patriots in the first half with a groin injury and did not return.

Following the backlash from the Sept. 11 pregame demonstration, Stills said he would continue to kneel before games to “continue to draw attention to the important issues we face as a society,” he said in a statement on Sept. 13.

Jenkins penned a story for TIME magazine on Sept. 15 in which he said he will continue to push for “equal rights and equal opportunities for every single person living in this country,” but will do so by standing for the national anthem.

“I do not have an ounce of hate in my body and absolutely have no intentions to disrespect the military. I come from a spirit of love and I aim to unite—not divide,” he wrote. “This is not about football, the flag, the military, or Jelani Jenkins. This is about the message: equality for all.”