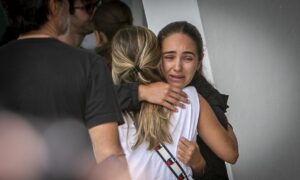 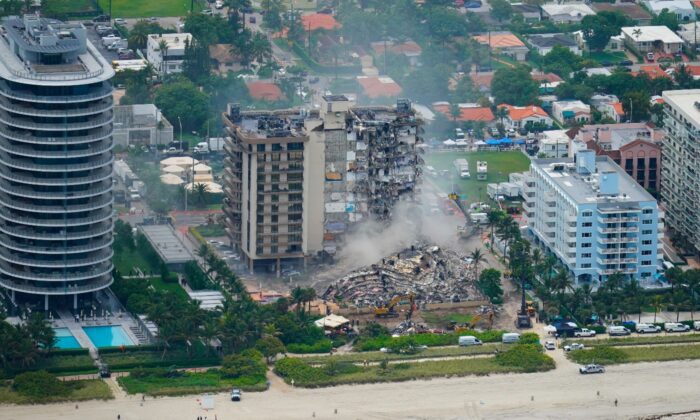 Rescue personnel work in the rubble at the Champlain Towers South Condo, in Surfside, Fla., on June 25, 2021. (Gerald Herbert/AP Photo)
US News

Authorities have confirmed that at least 10 people have died after a condo tower collapsed near Miami, coming as the mayor of Miami-Dade County has ordered an audit of buildings that were constructed at least 40 years ago in the area.

Rescue workers digging through the rubble have stressed that more survivors may be trapped inside the partially collapsed Champlain Towers South in Surfside, Florida, located within Miami-Dade County. About 150 people are missing.

“We have over 80 rescuers at a time that are breaching the walls that collapsed, in a frantic effort to try to rescue those that are still viable and to get to those voids that we typically know exist in these buildings,” Andy Alvarez, a deputy incident commander with Miami-Dade Fire Rescue, told ABC News on June 28.

Authorities have been able to create a tunnel through the building to find survivors.

During a news conference over the weekend, Miami-Dade County Mayor Daniella Levine Cava said that the county will carry out the audit over the course of the next 30 days. The Champlain Towers South, which was constructed about 40 years ago, was flagged in a 2018 report about needing repairs for “major structural damage.”

In a statement, the Miami-Dade government said that its Department of Regulatory and Economic Resources “will conduct an audit of residential properties of five stories or higher at the recertification point–40 years or older–that have not completed the process.”

The county requires buildings to undergo recertification starting at the 40-year mark—and every 10 years afterward—to determine whether they are structurally sound.

“The audit will start immediately and will be completed within 30 days,” the Miami-Dade government said in the statement. “For any buildings located within municipalities, the Mayor urges cities to swiftly conduct their own similar audits. The County will work closely with municipalities and provide any technical assistance necessary to conduct these audits.”

The cause of the Champlain Towers South collapse remains under investigation.

Rescue crews are working around the clock, sifting through the rubble for signs of life, even as hopes of finding more survivors grow dimmer by the hour.

Miami-Dade Fire Rescue spokeswoman Maggie Castro told CNN on June 28 that authorities are still trying to rescue people who might be trapped in the rubble.

“We are still attempting to find void spaces. We know that time is of the essence,” she told the network. “But, as you can imagine, it’s going to be less likely that we are going to be finding survivors.”

The 2018 report, prepared by an engineering firm for the condominium building, found serious concrete deterioration in the underground parking garage, as well as major structural damage in the concrete slab beneath the pool deck.

The engineer, Frank Morabito, reported that the deterioration would “expand exponentially” if it wasn’t repaired in the near future.

In a Twitter post over the weekend, Levine Cava said that with regard to other buildings made by the same developer who built the Champlain Towers South, the county “will work with the cities in which these buildings are located to provide technical assistance and to identify any possible state and federal funding to conduct these safety inspections.”