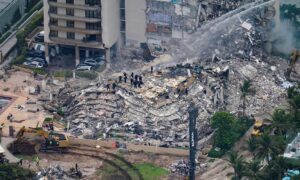 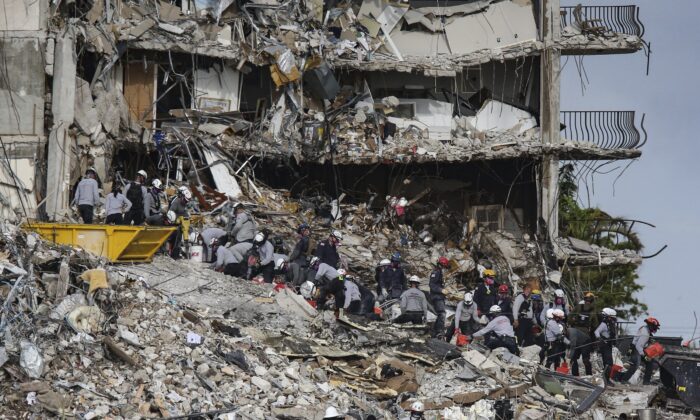 Officials in South Florida said on June 29 that more bodies have been pulled from the rubble of a partially collapsed condominium tower, raising the death toll to 18.

Jadallah said that workers were able to construct a ramp for a crane to reach areas near the top of the rubble pile.

Hundreds of first responders and volunteers have been working at the collapse site in Surfside, located near Miami, around the clock. Authorities are still calling it a search and rescue operation.

Meanwhile, Miami-Dade State Attorney Katherine Fernandez Rundle said in a statement on June 29 that a grand jury will investigate last week’s partial collapse. Over the past weekend, the city of Surfside released a 2018 report from an engineer who found the building had significant structural damage and needed repairs.

“My office has a long tradition of presenting more than just criminal cases to the Grand Jury,” Rundle’s statement said. “Our Grand Juries have also served as a cross-section of the community to evaluate matters of health and public safety,” she added.

It’s not clear what will be investigated by the grand jury.

“I plan to request that our Grand Jury look at what steps we can take to safeguard our residents without jeopardizing any scientific, public safety, or potential criminal investigations,” Rundle said.

The rescue efforts, however, may be imperiled by bad weather in the near future.

“There are two areas of (possible storm) development out in the Atlantic, heading to the Caribbean. We have eight urban rescue teams in Florida. We talked about doing a relief,” said Kevin Guthrie of the Florida Division of Emergency Management on June 29. “We have all the resources we need but we’re going to bring in another team. We want to rotate those out so we can get more resources out.”

The U.S. National Hurricane Center (NHC) says it is monitoring two tropical disturbances, including one with a 60 percent chance of formation, that may move toward North America.