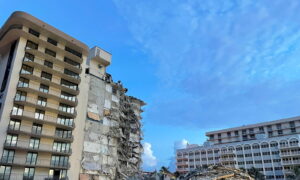 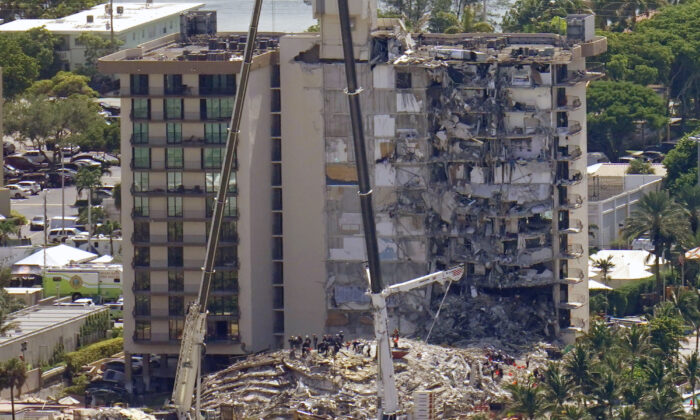 This aerial image shows an oceanfront condo building that partially collapsed on June 24, with many people still unaccounted for, in Surfside, Fla., on June 27, 2021. (Gerald Herbert/AP Photo)
US News

Rescue workers sifting through the rubble have stressed that more survivors may be trapped inside the partially collapsed building, adding that tunnels have been created in the collapsed remnants of the structure in order to find them. No one has been pulled alive from the building since June 24, when the incident unfolded.

“We have over 80 rescuers at a time that are breaching the walls that collapsed, in a frantic effort to try to rescue those that are still viable and to get to those voids that we typically know exist in these buildings,” Andy Alvarez, a deputy incident commander with Miami-Dade Fire Rescue, told ABC News on Monday morning.

The partial collapse took place at around 1:15 a.m. local time on June 24 at the condo in Surfside, located about 6 miles north of Miami Beach. Some 55 units of the complex’s 136 units were destroyed, said Miami-Dade Fire Rescue Assistant Chief Raide Jadallah.

“We have been able to tunnel through the building,” Alvarez added in the ABC Interview. “This is a frantic search to seek that hope, that miracle, to see who we can bring out of this building alive.”

Jadallah said in a news conference that authorities have been digging through “rubbles of concrete the size of basketballs” and “the size of baseballs” in an attempt to locate survivors.

Sniffer dogs and sonar-like devices, meanwhile, have been deployed in a bid to find any signs of life.

Mayor Cava confirmed that the 10th victim’s body was found on Monday, adding that about 135 people who lived at the condo have been accounted for and survived.

On Saturday, Levine Cava said she would authorize an audit of all buildings that were built more than 40 years ago in Miami-Dade. The Champlain Towers South was constructed in 1981 and was reportedly in the process of being recertified.

“There is going to be a thorough and full investigation of what led to this tragic event,” Levine Cava said during a press conference on Monday. “We are going to get to the bottom of what happened here. Right now, our top priority is search and rescue.”

The mayor may have been referring to a report dated 2018 that was released by the City of Surfside over the past weekend, detailing how an engineer warned the condo’s owners about “major structural damage” near the building’s pool deck.

The engineer in question, Frank Morabito, was hired to get a start on the building’s 40-year recertification process, and his report noted “abundant cracking” in the underground garage.

“Failure to replace the waterproofing in the near future will cause the extent of the concrete deterioration to expand exponentially,” he wrote.

Meanwhile, there have been reports that an official with the City of Surfside told residents in November 2018—after the engineering report was commissioned—that the building was in “very good shape,” apparently contradicting the findings that significant structural damage was present.

Update: This article has been updated to account for the death toll increasing to 11 late on June 28, 2021.