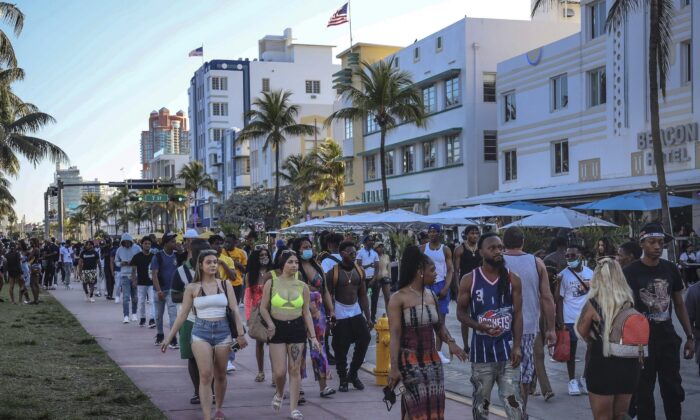 “If you want to see what a very frustrated and angry mayor looks like, you’re looking at him,” said Gelber, according to local media. “Our city is well past its endpoint. We can’t endure this anymore.”

Gelber announced that the new measures related to crowd control will be enforced for the remainder of the spring break period. The curfew will impact the area south of 23rd Street to South Pointe Drive, and from the Atlantic Ocean to Biscayne Bay, and it will run from 12 a.m. until 6 a.m. on Thursday, Friday, and Saturday, officials said.

“It’s going to implement a midnight curfew, beginning Wednesday night, Thursday morning, at 12:01 a.m., going through the weekend,” the mayor said. “This isn’t your mother and father’s spring break. This is something wholly different.”

Thousands of college students and other young people gather annually in Miami Beach for spring break, and this is the second year in a row that officials for the South Florida city have declared a state of emergency in the famed partying spot.

More than 1,000 people were arrested in March 2021, when the city imposed an 8 p.m. curfew. At the urging of some residents, city officials have been working in recent years to crack down on unruly behavior in South Beach.

The mayor said about 100 guns have been seized over the past four weeks, and several police officers have been injured while controlling the crowds.

Gelber said that five people were shot over the weekend despite 371 police officers being deployed.

This weekend, we’ve had 4 @MiamiBeachPD officers injured. This video is a snippet of the crowds and dangers we face. Officers are EXHAUSTED. The party needs to end. City officials must take immediate and firm action to ensure the safety of officers and residents. #SpringBreak pic.twitter.com/ZpL0rk2Ch9

Four officers were injured over the weekend, the Miami Beach Fraternal Order of Police wrote on Twitter.

“Officers are EXHAUSTED. The party needs to end. City officials must take immediate and firm action to ensure the safety of officers and residents,” the post read.