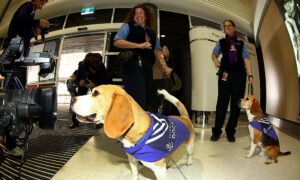 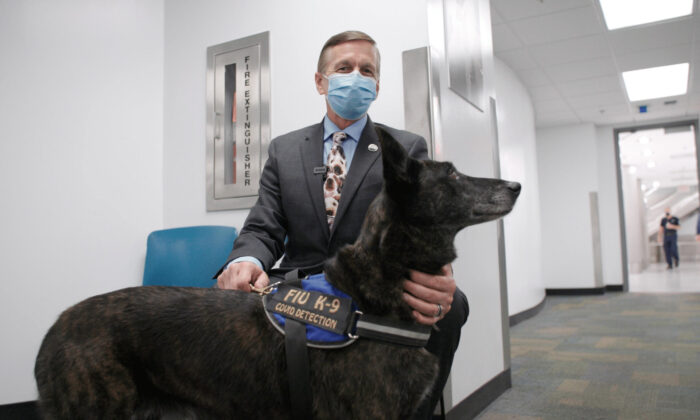 The international airport in Florida’s second-largest city is now using dogs that are said to be able to detect COVID-19.

The two canines, Cobra and OneBetta, recently started sniffing employees at Miami International Airport. One is a Belgian Malinois and the other is a Dutch Shepherd.

The dogs were trained with protocols developed by Florida International University’s Global Forensic and Justice Center. The training involved masks from people who were at the hospital and had COVID-19. Trainers taught the dogs to pinpoint an odor produced by metabolic changes in people infected with COVID-19, the disease caused by the CCP (Chinese Communist Party) virus.

If they alert their handlers, then the person is made to take a rapid COVID-19 test. The workers cannot work until the test results come back.

The effort, the first of its kind in the United States, stems from a partnership between the university, Miami-Dade County’s Board of Commissioners, the airport, and American Airlines.

Miami-Dade County Commissioner Kionne McGhee sponsored a resolution that was approved by the board in March to launch the program.

“We must not stay behind in our approach to fighting the spread of this virus. I am proud to be the sponsor of a program that will bring about crucial life-saving benefits for our communities,” McGhee said in a statement.

A peer-reviewed, double-blind study that examined the dog detection program, published in the Forensic Science International earlier this year, found the dogs were initially between 80 percent and 96 percent accurate in detecting COVID-19. That accuracy jumped in subsequent test runs, ending between 96 and 99 percent, depending on the dog.

Cobra was the most accurate, finishing with 99 percent accuracy.

“The dogs are 97 percent accurate. I mean, it’s the same as a PCR test. It’s a great thing,” Ralph Cutié, interim director of the Miami-Dade Aviation Department, told a recent press conference.

According to airport officials, the program is the first of its kind in the United States.

Cobra and OneBetta were trained for agricultural detection and could easily detect laurel wilt, a disease killing avocado trees in Florida.

“When COVID-19 came out, we decided, ‘well, let’s try to see whether we can switch them to COVID-19,'” Furton told reporters last week.

If the pilot program is successful, then officials involved say it could be scaled up.

“We hope to see this pilot program potentially benefit the rest of Miami-Dade County and airports across the country,” Cutié said in a statement.